I thought about birds this week – nēnē and eagles in particular – and the ways in which we may see the image of God in each of them. Two female nēnē or Hawaiian geese were killed by motorists just inside and outside Haleakala National Park over the last several weeks. It is the mating season for the nēnē and because Crater Road bisects their breeding habitat, it is critical that those traveling in and out of the park drive with caution. Natalie Gates, the Park Superintendent said, “We did not just lose two birds, we lost several potential generations of an endangered species.” (Star-Advertiser, Saturday, November 23, 2013) 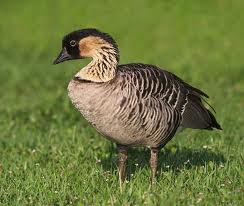 One of the birds was killed on Friday on the down-bound lane of Crater Road. Gates added, “Driving slowly along the entire length of Crater Road is the only truly controllable thing humans can do, on a daily basis, to help . . . ”

On Friday, Duke Energy Corporation based in Charlotte, North Carolina pleaded guilty to killing 14 eagles and 149 other birds at its Top of the World and Campbell Hill wind farms outside of Casper, Wyoming. All of the deaths which included hawks, blackbirds, wrens, sparrows and eagles occurred from 2009 to 2013. (The Christian Science Monitor, Dina Cappiello, Associated Press, November 23, 2013)

The power company agreed to pay $1 million as part of the first enforcement of environmental laws under the Migratory Bird Treaty Act that protects birds against wind energy facilities. (Op. cit.) Wind farms like the ones in Wyoming and the ones here on Maui at Kaheawa above Maʻalaea and the other above us at Ulupalakua are clusters of turbines that can be as tall as a 30-story building. The blades are as wide as the wingspan of a passenger jet.

The blades may appear to move slowly. But at their tips they can reach speeds of up to 170 mph. At the wind farms in Wyoming, we are told that the eagles are especially vulnerable because they do not look up as they scan the ground for food, failing to notice the blades until it is too late. (Op. cit.)

Speed seems to be the problem for the nēnē as well, not only from spinning rotors but from motorists speeding in and out of the park. Like the eagles, I imagine the nēnē never think to look up while flying or for that matter in both directions while on the ground before crossing the road.

But despite their inattention to the human-made hazards around them, both the eagle and the nēnē provide us with images of the nature and character of God. We find one of the images in the Bible. 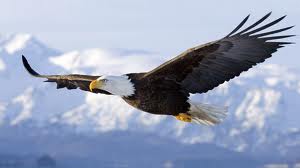 In the Book of Exodus two crucial events that occur that provide us an image of the eagle – the exodus from Egypt and the revelation of God at Mt. Sinai. The book bears witness to the meaning of God’s action to liberate a band of slaves from bondage and to make them a community, bound in covenant to the God who set them free.

It is at Mt. Sinai that God reminds Moses, “You have seen what I did to the Egyptians, and how I bore you on eagles’ wings and brought you to myself.” (Exodus 19:4) Later it is the prophet Isaiah who reminds the people of God’s concern for them: “ . . . those who wait for the Lord shall renew their strength, they shall mount up with wings like eagles, they shall run and not be weary, they shall walk and not faint.” (Isaiah 40:31)

In our reading this morning from The Letter of Paul to the Colossians there is reference to another image. We find an ancient hymn in scripture that refers to Jesus, in extravagant theological language, as “the image of the invisible God.” (Colossians 1:15) How we see God and how we speak of God is shaped in part by the different images by which others have come to know God and testified to God’s nature and character, including Moses and Isaiah but especially Paul.

Paul opens by presenting Jesus as “the image of the invisible God” and goes on to say he is the “firstborn of all creation” (v. 15) - not as a declaration that he was the first thing to be created but as a claim to his preeminent rank. (Psalm 89:27; Romans 8:29; Revelation 3:14).

He continues on by pointing out that “in him all things in heaven and on earth were created.” (v. 16; Romans 11:36) Biblical scholars will insist that “no conceivable part of the universe or reality as we can envision it can be explained or accounted for apart from the creative work of Christ.” (Preaching Through the Christian Year, Year C, Craddock, Hayes, Holladay & Tucker, Trinity Press International, Harrisburg, Pennsylvania, 1994, page 479)

His preexistence is asserted when Paul writes that he is “before all things” and “in him all things hold together.” (v. 17) It is around him that the universe comes into being and it is in him that reality coheres. (Hebrews 1:3)

He stands at the head of a “new creation.” “He is the head of the body, the church.” (v. 18) – a church that reaches beyond the four walls of this sanctuary and reaches into the heights and depths of the universe.

Paul’s extravagant language is meant to have us lift our heads up. If there is a lesson to be learned from the eagles and the nēnē it is for us to look up, to lift our vision of Jesus who is the Christ.

Through no fault of their own the eagles scan the ground for food not just for themselves but for their offspring and the nēnē make their way to nesting grounds where they will care for their young. We are no different in our care for our keiki.

We spend our days distracted by all the things that need to get done – running to and fro from one event, activity, and appointment to another. It would seem we have our shoulders to the wheel as we plow ahead, backs bent, heads down.

As we celebrate the Reign of Christ this Sunday in our lives and in our world, Paul encourages us to launch our thoughts upward. We are to see that in the Jesus the Christ, we are taken from the beginning of time to the end of time, from alienation to peace, from creation to new creation.

Two years ago I accepted an invitation to offer a blessing for the Makamakaʻole Seabird Site for Kaheawa Wind out in the Kahakuloa area of West Maui. Kaheawa Wind, in partnership with its parent company First Wind in Boston, is committed to a 20-year term of a to maintain a nesting habitat for the seabirds including the ōpeʻapeʻa, ʻuaʻu and ʻāʻo – the Hawaiian bat, petrel and shearwater. The habitat also includes nēnē.

We see in the eagle, God’s promise of renewed strength and in the nēnē, God’s care and compassion. Both are living creatures who remind us of the nature and character of the living God whom we worship this day.

As we enter into this week of Thanksgiving may it be a time for giving thanks to God for Jesus the Christ, the One who guides all of us into the way of peace. (Luke 1:79) Mahalo ke Akua!