With Green Wednesday, Black Friday, and Small Business Saturday now passed and Cyber Monday and Giving Tuesday coming up, the rush and crush of the holiday season is well underway. The season of Advent is a week away and not long after that we will be celebrating the season of Christmas. 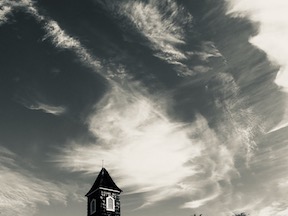 It is surprising then that the gospel lesson from the lectionary for today is focused on the trial and crucifixion of Jesus. It’s not exactly the kind of image meant to market Christmas good cheer. If anything, it is a jarring reminder that we live in a world of unending violence.

As we come to the close of the season of Pentecost, we are aware that Jesus’ ministry is coming to an end. He begins to prepare his disciples for what is to come. Those who are opposed to Jesus are Jewish religious leaders who accuse him of blasphemy. They bring him first to Annas, who was the father-in-law of Caiaphas, the high priest. It was Caiaphas who advised the religious leaders that it was better to have one person die for the people (Matthew 18:12-14).

After being questioned by Annas and struck on the face by a Roman police, Jesus is bound and sent to Caiaphas. From Caiaphas he is then taken to the Roman praetorium where Pilate is serving as the governor of Judea.

They want Pilate to condemn Jesus to death but Pilate senses that they are not clear about the charge they have against him (John 18:30). He attempts to have them to issue their own judgment, but they refuse (John 10:31-32).

Pilate enters the praetorium and calls Jesus to him and questions him there. His first question addresses Jesus’ identity as “king of the Jews.” The title of ‘king’ is loaded with political meaning for the Romans.

Pilate governed Judea for an unusually long period of time, which some say indicated that the Roman government was not displeased with his performance (Harper’s Bible Dictionary, Paul J. Achtemeier, General Editor, Harper & Row, Publishers, San Francisco, 1985, page 797). Pilate knew enough that the Romans had little tolerance for any other king but Caesar. That Jesus’ followers would dare declare him a king was cause for great, great concern.

Pilate presses Rome’s full authority against Jesus when he asks the question: “Are you the king of the Jews” (Op. cit.). Boldly and perhaps to some, foolishly, Jesus does not succumb to the pressure. He does not answer the question, but instead challenges Pilate with a question of his own.

Jesus wants to know the source and motivation for Pilate’s inquiry (John 18:34). Pilate responds by asserting that he is a Gentile and not a Jew and that he has no personal interest in Jesus’ status among the Jews. His response seems to indicate that Jesus’ is aware that his suspicion has turned out to be true. There is a conspiracy against him. The people and the chief priests have handed him over to Pilate (John 1:11; 11:47-53).

Pilate then asks Jesus: “What have you done?”

Those outside the praetorium know. The chief priests and the people who oppose him are well aware of Jesus activities – of preaching, teaching and healing. But Pilate does not know.

Jesus evades Pilate’s questions and Pilate is compelled to ask again, “So you are a king?”

It is then Jesus reasserts his previous answer. He claims twice that his kingdom is not of this world. If it were so, then those following him, he insists, would fight for his release (John 18:36).

Jesus makes the assertion that his kingdom is not a threat to Roman rule and power, but the religious leaders opposed to Jesus are aware that Jesus’ “rule and kingdom are, [in fact] profoundly subversive to any worldly authority that demands allegiance over loyalty to God” (Feasting on the Word, Year B, Volume 4, Bartlett & Taylor, Westminster/John Knox Press, 2009, page 337). But Pilate does not yet see it (Op. cit.). Jesus is clear that it is the kingdom of God that he has been proclaiming and revealing (John 1:9-13, 49-51; 3:1-21; 6:1-14, 29-40).

Today is the Reign of Christ Sunday. It is the day when the church proclaims Christ the King of all kings – and the king of all presidents and prime ministers, dictators and despots.

It an immigration policymaker’s nightmare but for those who accept the truth of Jesus’ identity and witness, the Biblical admonition and reminder is clear: “When an alien resides with you in your land, you shall not oppress the alien. The alien who resides with you shall be to you as the citizen among you; you shall love the alien as yourself, for you were aliens in the land of Egypt. I am the Lord your God” (Leviticus 19:33-34).

For those who doubt the position of the Bible when it comes to how we should treat the stranger or sojourner, the gospel approach is summed up by Jesus his teaching on the sheep and the goats recorded in The Gospel According to Matthew. “ ... I was hungry and you gave me food, I was thirsty and you gave me something to drink, I was a stranger and you welcomed me, I was sick and you took care of me, I was in prison and you visited me” (Matthew 25:35).

Our allegiance as people of faith is not to a flag or a nation state but to the cross and the kingdom of God – here on earth as it is in heaven. I have also said this before and I will say it again.

There is no power in hate. There may be a whole lot of zeal but not much else. Hate eventually consumes those who hate.

But there is power in love. Our reading of the account of the trial and crucifixion of Jesus on a day such as this would hardly seem to be the kind of story that would send us out into the world rejoicing. Yet we know that it was on the cross that the power of God’s love was fully expressed. We know that Jesus took upon himself the sins of the world that we might be set free to love.

I know that today there some who would think nothing of putting Jesus on trial for a second time were he to walk among us. Like the religious authorities and people who colluded with the Roman authorities to bind and take Jesus to Pilate, there are those today who have it made it clear that their allegiance is to the principalities and powers of this world.

Over a year has passed since white nationalists and neo-Nazis gathered in Charlottesville, Virginia for a “Unite the Right” rally over a two-day period that resulted in the death of one person and injuries to several others. I imagine that many if not most of the white nationalists and neo-Nazis who were there in the summer of 2017 believe that the United States is a Christian nation.

If that is the case, I have since wondered how it was that grown men in white shirts and khaki trousers carrying torches would find any comfort in proclaiming to the world - “Jews will not replace us.” The burning of a wooden cross has no place in the United States of America or in the kingdom of God.

Jesus was a Jew. He replaced us on the cross to show us the way of aloha. He died that we may live and for that we have cause to rejoice.