The Necessity of Watchfulness

Most Biblical scholars believe The Gospel According to Matthew was composed around 80 or 90 CE. Jesus addresses the despair of many who see the world coming to an end and those who are certain he will be crucified.

This account of his life and death was read by second generation Christians. They knew about the resistance of their Jewish ancestors to the Romans years earlier in 66 CE. The Roman Emperor, Nero, sent an army to restore order in the northern part of the province. 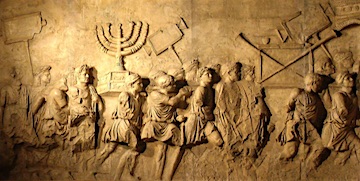 By the year 68, the rebellion was crushed. The army then turned its full attention to Jerusalem.

After a two-year siege, the Romans breached the outer walls of the city. Jerusalem fell and the city was ransacked. In the ensuing mayhem, the Temple was set on fire, looted and destroyed.

Thousands of people were slaughtered. Men, women and children, young and old. They were all killed in the grip of war, whether they offered resistance or cried out for mercy. Thousands more were enslaved and sent into exile. The Temple lay in ruins.

For many, it was the end of the world.

The rebellion continued for three more years and was finally eradicated in 73 BCE. The Jewish historian Josephus wrote “ ... the Jews let out a shout of dismay that matched the tragedy.” (eyewitnesshistory.com)

Our reading from The Gospel According to Matthew is best understood within the context of that history. It makes sense that the writer of Matthew sought to provide hope where there was no hope – following the death of Jesus and the destruction of the Temple.

As we begin this season of Advent, we are invited on the one hand to consider God’s promise of Immanuel - of how God came in human flesh in Jesus to dwell among us – and on the other, we are also invited to anticipate the day when he will return.

Today’s reading is full of the signs of the end of time. Over the centuries, many have argued about how and when the world will come to end; about Jesus’ return; and of how God will judge all peoples and nations.

Any attempt we may make to set a timetable for his return instantly fall by the wayside in light of Jesus’ explicit warning: “But about that day and hour no one knows, either the angels of heaven, nor the Son, but only the Father (sic). (Matthew 24:36)

But the temptation to issue a dire warning is made with each passing generation. It would seem that the signs are upon us today - the recent earthquakes in Italy, Aotearoa and Japan and even Oklahoma are construed by some to be signs that the end is near. There are wars and armed conflicts in every corner of the earth. There are famines and droughts. Not so long again it was the Ebola virus now it is the Zika virus.

Surely the end must be near. But Jesus points to ordinary every day occurrences - rather than extraordinary signs of disease and pestilence; war and natural disasters. – that will signal that the end is near.

No floods or famines, just “eating and drinking, marrying and giving in marriage.” (Matthew 24:38) No earthquakes, only two men tending their fields and two women grinding meal together. (Matthew 24:39-40) Still we worry and we grow anxious, not wanting to be left behind.

Jesus’ words of caution are clear: “Keep awake” and “Be ready.” (Matthew 24:42, 44) We are reminded that whatever the future may hold for us, our trust and our hope is in the God whom we call Immanuel.

Our readings from Matthew and from the prophet Isaiah call us away from anxiety and worry to hope and courage. After all, it may be argued that the day of God’s judgment is not at the end of human history but the day of God’s judgement is at the time of our own deaths. Each of us will stand before God to give an account of our lives.

It’s possible that “one day Jesus may appear in the clouds, suddenly like a thief in the night. But before that – as Matthew reminds us – Jesus will appear just around the corner, suddenly, like a hungry person, or a neighbor ill-clothed or someone sick or imprisoned. We must always be ready.” (Feasting on the Word, Year A, Volume 1, Bartlett & Taylor, Westminster/John Knox Press, Louisville, Kentucky, 2010, page 24)

As we begin this season of Advent, we proclaim the coming of our God into the world. Today, we have lit the candle of hope as a foretaste of the light that is to come in the Christ child. (Preaching Through the Christian Year, B, Craddock Hayes, Holladay & Tucker, Trinity International Press, Harrisburg, Pennsylvania, 1992, page 9) Let us, then, walk in the light of the Lord throughout this Advent season that peace, love, joy and especially hope may abound.