Keʻala stopped by the office yesterday to share a couple of photographs of Liam, her new-born grandson. Liam Keolakūpaianahaokealiʻikoa Arrieta Yap was born on Thanksgiving Day, November 28, 2013 to Kāhea Arrieta and Kalaʻi Yap. 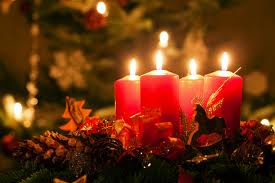 It is with that sense of joy that we celebrate the birth of the Christ child each year. But before we celebrate Christmas day, there is Advent.

Ironically, it would seem that once Thanksgiving is over we want to skip Advent and go right into Christmas – the carols and cards, the trees and truffles, the poinsettias and wreaths, the lights and gifts. The irony of the rush to embrace all of the trappings of Christmas is how much we complain when Christmas ornaments and decorations begin to appear in stores as early as Halloween at the end of October.

We insist that the Christmas season begins after Thanksgiving. So why not sing the Christmas carols and shop our way through the holiday season?

Today we enter the season of Advent. It is a season in itself. It cannot be rushed. In the same way that Liam’s birth could not be rushed so it is that we cannot rush the birth of the Christ Child.

In their day, Mary and Joseph had to make the long, difficult journey to Bethlehem. They had to find a place to stay and food to eat. There were no hosts of angels or magi from the East celebrating what had not yet occurred.

Advent is a time when we proclaim the coming of the Lord, but that is not the same as saying that Christmas is coming. Our reading from The Gospel According to Matthew has nothing to do with the birth of Jesus and everything to do with the “Second Coming” of Christ.

It would be easy for us to get embroiled in a debate about whether this is the season of Jesus’ birth or Christ’s return. But if we step back a bit we would do well to take a look at what the Bible affirms in either case: God is the one who comes to the world.

As for his return, the questions we are faced with include: “How shall the day of the Lord be when he does return?” “Will it be a day of darkness or light, joy or dread, judgment or redemption?” (Preaching Through the Christian Year, A, Craddock, Hayes, Holladay & Tucker, Trinity International Press, Harrisburg, Pennsylvania, 1992, page 9)

Our observance of Advent should not only be about joy and anticipation but also the need for repentance, the need to make things right. What then would we have to say for ourselves if we received the news that Jesus was coming to Maui tomorrow?

The time of the Lord’s appearing is not known by the angels or even by the Son of God, but by ke Akua, by God alone. In the meantime, we are called to keep watch. Matthew offers us different images about what that means.

First, there is the analogy of the catastrophic flood. (vv. 37-39) In this case it is not the wickedness at the time of the Great Flood in the days of Noah that troubles Matthew (Genesis 6:5-7, 12-13) but the lack of being prepared.

Second, in verses 40-41, the image of the one taken and the one left behind replaces the image of total destruction that we have become accustomed to hearing about whenever there is talk of the end of the world. And third, the exhortation to be watchful (vv. 42-44) is that of the parable that follows our reading of the faithful or unfaithful servants. If the householder had known to be alert, his house would not have been burglarized.

So the three images include a flood, a kidnapper and a thief. They are no doubt disturbing images with which to begin this season of Advent. But they all make clear that we must be alert in all of our preparations: Watch, stay awake; the Lord is coming so let us be about doing the Lord’s work until he comes.

Advent is about preparing for and anticipating God coming into our lives not just on Christmas day but every day. As we gather around this table to share in the eating of the bread and the drinking of the cup, we give thanks for this season of Advent.