"There Will Be Signs"

Consider what happened over the last week. A 6.0 earthquake struck off the coast of Columbia on last Saturday. The quake was also felt in Costa Rica, Honduras and Nicaragua.

The next day a 6.3 earthquake on the other side of the world struck western Iraq injuring more than 500 in Sarpol-e-Zahab in the Kermanshah province. Last year, the province was the epicenter for an earthquake that killed more than 600 people. 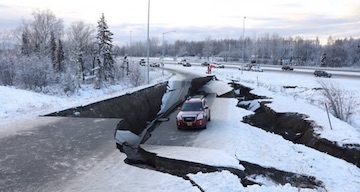 On Friday, a 7.0 magnitude earthquake hit Alaska, damaging highways and buildings, prompting a tsunami warning that was later canceled. The quake was about eight miles north of Anchorage, the most populous city in the state.

Surely, these are the signs that the end of the world as we know it is close at hand.

Ukraine has declared martial law after the Russian coast guard opened fire and seized three Ukrainian vessels and their crew. Canada, France, Germany, Italy, Japan, the United Kingdom, the United States and the European Union have all condemned the Russian aggression in Ukraine.

Over the last three years, Yemen, the Arab world’s poorest country has been wracked by a bloody war between Houthi rebels and the Yemeni government. A coalition of Arab states led by Saudi Arabia launched a military campaign in 2015 to defeat the Houthis.

The Saudi-led coalition air attacks backed by U.S.-made weapons have caused almost two-thirds of the civilian deaths. Millions have been displaced. Over 280,000 have sought asylum in other countries. As many as 85,000 children may have starved to death in the past three years and as many as 14 million more are facing an impending famine.

Along the U.S.-Mexico border more than 6,000 asylum seekers are awaiting entry into the U.S. at the border at Tijuana. Tear gas was used on some of the migrants who approached the border wall in Tijuana last weekend. In the meantime, over 14,000 migrant children are being detained in over 100 shelters in 17 states.

In China, the government has established “re-education” camps where approximately one million Uighurs, a Muslim minority in Xinjang province, are being confined against their will. Government policies have curbed religious freedom and increased surveillance of the Uighurs under the guise of combating terrorism and extremism.

A year has passed since more than 700,000 Rohingya refugees were forced to flee from Myanmar to Bangladesh. The denial of their legal status and unacceptable living conditions in camps have trapped the refugees in a cycle of suffering. They joined over 200,000 others displaced by previous waves of violence, bringing the total number of Rohingya refugees in Bangladesh to over 900,000.

Surely, these are the signs that end of the world is near. There is, indeed, great distress between and within the nations.

It has been a year filled with super typhoons across Southeast Asia, hurricanes in the Caribbean and here in the Pacific, wildfires in the U.S., dust storms in Australia, freezing winter storms, floods and more. Surely, these are the signs that end of the world is near.

In our reading from The Gospel According to Luke Jesus declares, “There will be signs in the sun, moon and stars” that all is coming to an end. We may be tempted to conclude that the end is near yet despite all of the “predictable” signs in Luke’s account, that would be a mistake.

Luke’s writing is not addressed to us but to those who were living in the aftermath of the devastating destruction of Jerusalem and the temple by the Romans (“Living the Word,” Christian Century, William H. Lamar IV, November 7, 2018, page 20). As surely as one can discern the approach of summer by the leafing of the fig tree, so these signs Luke asserts will announce that the kingdom of God is near (Luke 21:29-31).

But when will that occur? the people wondered back then. Luke says within the generation to those whom he was addressing his writing.

He “joins many other early Christians in the belief that they were living in the period between God’s punishment of Jerusalem by the Gentiles (nations) and God’s judgment of the nations by the Son of man whose appearing will bring redemption to the faithful” (Preaching Through the Christian Year C, Craddock, Hayes, Holladay & Tucker, Trinity Press International, Harrisburg, Pennsylvania, 1994, page 6).

Like those in the first century, we too may find ourselves expecting and wanting Jesus to return in a cloud. But whether or not that happens, we “know that the kingdom of God is [always] near” (Luke 21:31).

The Rev. William H. Lamar IV is the pastor of the Metropolitan African Methodist Episcopal Church in Washington, D.C. In his reflections on our reading from Luke this morning, he notes: The apocalyptic language found in Luke “is the poetic speech of the oppressed and bruised straining toward hope. It declares God’s cosmic victory in the face of [what some see as] God’s defeat. The people of God were straining toward hope. They needed to believe in the hidden victory of God” (“Living the Word,” Christian Century, William H. Lamar IV, November 7, 2018, page 20).

Jesus makes a promise to those in the first century. “Truly I tell you, this generation will not pass away until all things have taken place” (Luke 21:32. But the generation to whom Jesus was speaking has passed away. Was the promise broken?

No one knows the day or the hour when all of these things will happen, not even the angels in heaven or Jesus himself (Mark 13:32). If that is true, why would we presume as human beings to know the hour or the day when Jesus will come in a cloud. (Luke 21:27). Only God knows.

We may want to pray for strength to escape all the fear and foreboding that are taking place in our world today, but I would encourage us to pray, instead, for strength so that God’s kingdom will come on earth now as it is in heaven.

We mark the beginning of this season of Advent to declare that the kingdom of God is always near. We anticipate, not the coming of the Son of Man in a cloud with power and great glory (Luke 21:27), but the coming of a powerless Child born in a manger who will be the sure and certain sign of God’s abiding aloha for the world. For that we give thanks to God.