Today marks the first Sunday of the Advent season, a time when we prepare for the coming of the birth of the Christ child. Thanksgiving, Black Friday and Cyber Monday have come and gone.

Family and friends are returning “home” to Maui. Each passing day is filled with too many parties and too much shopping. Our obligations have become burdens. 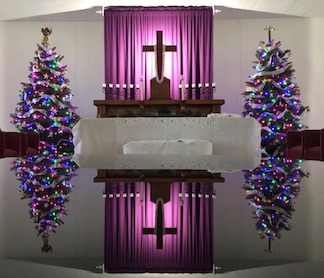 Some, if not most of us, are overscheduled and overwrought. Others of us are sleep-deprived. Keeping awake is not something we can do so easily.

But “keeping awake” is the admonition that comes to us from our reading from The Gospel According to Mark. It may seem odd that our reading from Mark is focused on cosmic signs pointing, not to Jesus’ birth, but to his second coming.

Unlike Matthew and Luke, there is no “born-in-a-manger” story. Still, it is evident that for Mark “Advent has to do with the coming of the Lord, the birth being one form of the appearance of Christ;” his second coming another.

“At the time Mark wrote his Gospel, Jerusalem and the temple lay in ruins for the second time. Civil strife had outlived patience of the Roman government, and the threats begun by Emperor Caligula in 39-40 CE are now being carried out in 70 CE” against the followers of Jesus (Preaching Through the Christian Year B, Craddock, Hayes, Holladay & Tucker, Trinity Press International, Harrisburg, Pennsylvania, 1993, page 5). The people are in great distress.

In our reading from The Book of Isaiah, there is a similar distress among the people. The passage contains “a powerful plea for God to intervene in their lives to bring redemption to those who were exiled in Babylon centuries earlier after the fall of Jerusalem in 586 BCE or after the return to Jerusalem under the Persian king Cyrus in 530 BCE. The lament reflects their alienation from their homeland, living in a foreign land, and their estrangement from God.

In Isaiah’s day, the lament is a plea for God to act, not in some normal way, but with a force that God caused mountains to quake and fire to blaze forth (Exodus 19:16-18; Psalm 114:3-6). The lament reflects their belief that God can act to bring about that redemption for those who wait because neither ear nor eye knows of any God so great! (Preaching Through the Christian Year B, Craddock, Hayes, Holladay & Tucker, Trinity Press International, Harrisburg, Pennsylvania, 1993, page 2).

Mark sought to offer words of hope to those who were faced with an uncertain future and troubled by what they were experiencing at the hands of religious and political authorities. False or “fake” messiahs and prophets (Mark 13:6, 22) began to emerge causing confusion. Experiencing the absence of Jesus, Mark was keenly aware that “the faithful [were] torn between giving themselves up to despair or reaching for any flicker of hope” (Ibid., page 6).

Mark’s message is that a final day of judgment and redemption will come “but it will be at God’s determination and accompanied by signs God will give” (Op. cit.). All human calculations will be of no use.

“In fact, the day of the Lord is not tied to any political condition or religious institution. The . . . woes of any nation, even a nation [such as the United States] claiming to have a central place in the purposes of God, do not dictate the time or place or form of God’s advent” (Op. cit.)

Even religious institution, those established to serve and honor God such as temple or church, cannot fix a date on the calendar. “God survives all [of our] human structures and institutions, sometimes having to shatter and re-create the communities that exist for God’s work in the world” (Op. cit.) If we are to have any hope, it will be for us to trust in the faithfulness of God amid the rise and fall of the worst and best of our human endeavors.

Christopher Hutson is the Associate Dean of the College of Biblical Studies at Abilene Christian University in Texas. When the financial institutions across the U.S. collapsed in 2008, Hutson offered the following words of caution that may well apply to us today: “Amid the smoke of battle, the fog of politics, the confusion of economic distress, the babble of would-be leaders wearing God masks and claiming divine authority, how shall we know which way to turn? God’s people should not be surprised or confused, because Jesus warned us ahead of time that such things would happen.”

“The powers that be will lull us to sleep by reassuring us that they have our best interests at heart as they pursue their worldly agendas. They play on our fears, our prejudices, our self-interests, so we do not notice ... ” (Feasting on the Word, Year B, Volume 4, Bartlett & Taylor, Westminster/John Knox Press, Louisville, Kentucky, 2008, page 24).

For the Jewish people held in captivity under the Babylonian Empire, for the followers of Jesus Christ living under the occupation of the Roman Empire and for any who are oppressed by the “empires” of our world today, we are called to be alert and watchful and to know that “trust in the faithfulness of God is faithfulness in our work and witness. To keep awake is to be faithful in our work, as though we were already in the presence of the One for whose coming our hearts are eager” (Preaching Through the Christian Year B, Craddock, Hayes, Holladay & Tucker, Trinity Press International, Harrisburg, Pennsylvania, 1993, page 6).

Dr. Judy Yates is the Visiting Professor of New Testament and Christian Origins at Loyola Marymount University in Los Angeles. While our reading from Mark is focused on the Second Coming of Jesus, Yates agrees that Mark’s focus is equally applicable to the birth of the Christ Child – the theme of both is waiting.

“In this Advent season we must watch and wait! As we move through the season, as we move closer to the coming of the Christ child the admonition to be alert once again cries out across time and space.”

Let us pray: Mahalo ke Akua for the gift of life that is ours today. We give thanks that your face shines upon us – for you are our salvation. Lead us like a shepherd through this day.

Strengthen us for whatever lies ahead. Grant us the spiritual gifts of peace, patience, kindness and gentleness for it is our desire to share and to show your aloha in word and deed to others – ma ka inoa o Kristo – in Christ’s name. Amen.