I met Keali‘i, a young Hawaiian man, late in the week at a networking event in Wailea for real estate agents. He was there to talk about his work with Kupu, a non-profit organization based in Honolulu but with interns serving on other islands, including Maui. I was there to offer a blessing and to offer words welcome to those who had come from Kaua‘i, O‘ahu and Hawai‘ island as well as those who live on Maui.

Kupu was established in 2007 in response to the growing need in Hawai‘i to train the next generation in natural resource management, renewable energy, energy conservation and sustainability. Kupu houses and manages four serving-learning programs for youth.

The young Hawaiian man that I met was among hundreds who at one time served as interns in the various programs that continue to this day. Keali‘i was able to serve as intern because of the kōkua or support of the real estate agents for Kupu. 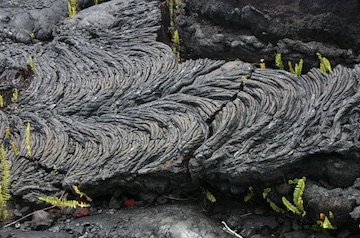 We had a chance to talk story prior to a presentation that he made on his experiences as an intern and now a member of a conservation team. As we talked, he explained that the name of the non-profit organization - kupu - means “to sprout, grow, germinate, or increase.” Much like the kupukupu fern of the same name, which is one of the first plants to bring life back to the land after a devastating lava flow, Kupu’s purpose is to bring life back to the people, land and ocean.

We have the kupukupu fern growing in our church yard. Right now it is being overrun by a shrub but it is a hardy fern that will not be pushed aside.

The volcanic activity on Hawai‘i island reminds us that fresh, barren lava fields continue to dot the landscape. The appearance of the kupukupu fern along with the ‘ōhi‘a tree is remarkable because of the unforgiving heat and wind that makes it impossible for any other vegetation to take hold so quickly.

Out of the windswept landscape, tiny green sprigs take hold and the promise of new life appears. It’s very likely that the prophet Isaiah knew nothing about kupukupu fern or ‘ōhi‘a tree in his day and time. But he did know that “out of something that appears finished, lifeless, left behind, comes the sign of new life – a green sprig.” (Feasting on the Word, Year A, Volume 1, Bartlett & Taylor, Westminster/John Knox Press, Louisville, Kentucky, 2010, page 28)

That awareness is what is at the heart of our reading from The Book of Isaiah. Amid “the terror and brutality that pervade our world” (Ibid., page 26) through wars and armed conflicts in all but a few countries, Isaiah’s vision of a world at peace is in sharp contrast to what we actually see Africa, South America, Asia and the Middle East.

One wonders if Isaiah’s declaration is a prophecy or a fairy tale. The notion that the wolf shall live side by side with the lamb or the calf and the lion shall lay down together is wishful thinking at best. It will never happen!

Yet we find ourselves fascinated with photographs of a rat and cat laying side by side or a tiger nursing baby pigs or a cat riding on the back of a dog (Op. cit.). How odd, how cute, how bizarre!

But others have point out that we recognize something deeply profound in Isaiah’s vision. If the animals can overcome their bloody instinct to prey upon one another, to the death, how might we as human beings overcome our own propensity to do the same?

For Isaiah, the transformation from a world of war and hatred to a world of peace and compassion begins with a stump. Out of what appears to be a barren stump appears a green sprig.

Hope begins as a tiny sprig in the most unexpected of places. Like the kupukupu clinging to the slightest crack in the pahoehoe or smooth lava or the ‘a‘ā or stony lava, so it is that out of the stump of a tree, a branch will grow.

I had a conversation with Wally earlier in the week at his office in Wailuku. Wally is serving as the Interim Minister at ‘Īao United Church of Christ. He was at his desk on Monday morning preparing his sermon for today.

We both follow the weekly lectionary of readings for the church calendar year. When I asked him about the readings that drew his attention, he said that he would continue to focus his attention on The Book of Isaiah.

On the First Sunday of Advent, Wally highlighted Isaiah’s vision of a world in which the weapons of war are turned into instruments of peace. Can such a vision become a reality?

He wrote, “If we read Isaiah’s words as a wish for a reality to come, then the answer obviously is, it probably will never be. To expect nations to make that kind of hundred eighty degree turn in policy would fly in the face of history. It has never been so, and most likely will never be achieved. But if we look at Isaiah’s inspiring vision through the lens of hope, theologically understood, then I believe it is a reality. There is a difference. Wishing is not hoping, even though we get it confused with each other.” (Sermon at www.iaoucc.org)

The same may be said about Isaiah’s proclamation of the coming reign of God, which “we read through our Christian lens as the coming of Christ.” Feasting on the Word, Year A, Volume 1, Bartlett & Taylor, Westminster/John Knox Press, Louisville, Kentucky, 2010, page 30) Wally went on to say, “In our faith as Christians, we believe that the coming of Jesus into the world changed reality. Because we believe it to be so, we see things as Jesus sees reality, not as other voices tell us we ought to see.” (Sermon at www.iaoucc.org)

Those of you who enjoy Christmas movies recall the film, “The Santa Clause,” with comedian Tim Allen in the lead role. One of you reminded me yesterday that there is a scene in the movie when Tim Allen’s character arrives at the North Pole and sees a polar bear directing traffic.

He tells his traveling companion whom we come to know as Little Elf Judy: “I would not have believed it. But now that I see it, I believe.” Little Elf Judy responds, “Seeing isn’t believing. Believing is seeing.”

There are those who cannot see Isaiah’s vision of peace coming to fruition. But again Isaiah’s vision offers us hope and it is from a sprig of hope that we believe peace will come not because Isaiah or any of us can presume to bring such a peace to pass.

The prophet Isaiah is clear peace will come not at our own bidding but at God’s doing. It is God who will bring forth peace through the birth of the Christ Child.

As we continue through this season of Advent, may the God of hope fill us all with joy and peace in believing, so that we may abound in the power of the Holy Spirit. Mahalo ke Akua. Thanks be to God!