In 733 BCE Assyria was a great regional power. The smaller nations of Syria and the northern Kingdom of Israel formed an alliance in defense of the oncoming threat that took place during the Syro-Ephraimitic war.

Both had previously been tributary nations to Assyria until they decided to break away. The southern Kingdom of Judah refused to join the alliance. In the years that followed Judah was defeated. 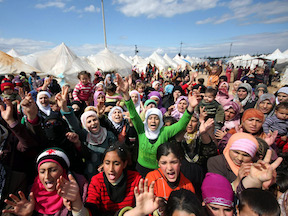 Thirteen centuries later another war rages. The most recent estimate of those affected by the current civil war in Syria includes more than 100,000 who have been killed, more than 6 million have been internally displaced and more than 2 million have fled to refugee camps in bordering countries. The losses are profound.

Whether in the 8th century or in the 21st century, the prophet Isaiah offers us a vision of hope in a time of war. In our reading from The Book of Isaiah we learn that a new leader will not simply be gifted but will be so infused with God’s spirit that the world would be transformed.

From a “new shoot” (Isaiah 11:1-5), there will come a “peaceable kingdom.” (Isaiah 11:6-10) The prophecy that it shall be a little child who will lead the way upends our ideas about what constitutes strong leadership. (Seasons of the Spirit, SeasonsFUSION – Christmas, Advent, Christmas, Epiphany, 2013-2014, Wood Lake Publishing Inc. 2013, page 44)

To appreciate how dramatic the prophecy is, we need only to remind ourselves that children in Isaiah’s time were more expendable, powerless and an economic burden than in our world today. But that vision of hope embodied in a child is Isaiah offers to us.

“Hello. My name is Isaiah and I am a prophet. A prophet is someone who tells people about God. A prophet wants all the people to listen and to learn about who God is and what God does. Life is difficult for the people of Judah, where I live. The people of the land are afraid and sad that other nations are trying to take over and they feel that God is not really listening to them.

I was thinking about all of this and suddenly a picture came into my mind. I knew that God wanted the leaders and people of Judah to hear about it.

The picture was of a tree that had been cut down; it was just a stump, its life and beauty gone. But from the root of that tree a new branch would grow and it would become a strong tree again. I told the people not to give up hope; just like the new branch that grew from the stump of the tree that seemed dead, a new leader would come. This leader would have the Spirit of God and all of God’s knowledge and understanding.

This person would be happy and really enjoy knowing God by seeing and hearing about all the good things God has done and will do. Caring for the poor and teaching bad people to be good would be something for this person to do.

The rest of my story was all about what would happen if God made all things good and safe. I told about a mountain where no one would be hurt and all the animals would live together. No animal would hunt and kill another animal for food.

A few weeks ago I was listening to a story on National Public Radio about someone in Africa recalling that when he was a child there were never any reports of animals killing human beings. Somehow they managed to live together.

But as things began to change and animals were moved into wildlife reserves, the attacks began to occur. Segregation, he said, made for bad neighbors. I initially thought that his comments came from a childhood fantasy – of animals and human beings living together peaceably - but then it made me realize Isaiah’s vision may not been so far-fetched.

Whether or not Isaiah’s vision of such a world is meant to come to pass, his vision of hope points to the power and wisdom found in a vulnerable child and the unexpected movement of God’s Spirit in our lives and in our world. In this season of Advent there are many who are discouraged and without hope. Still we wait for hope.

We all have hopes for ourselves, our families, and our world. Even though Advent is a time of waiting, there are things we can do to make our hopes come alive.

We can use this time to think about God and God’s plan for our lives. The advertisements in newspapers, magazines and on television tell us to hope that we get a lot of presents. (Ibid., page 51)

Making ready means shopping, shopping and more shopping. We must shop and help the economy grow. Could it be that what is important during this time is for us to think more about what God hopes for us than what we get on Christmas day?

On Friday a remarkable man died at the age of 95. His name was Nelson Mandela. In one of the many tributes that have been made, it was said that he was the moral compass and symbol of the struggle against racial oppression in South Africa. (Nelson Mandela dies at 95, CNN.com)

It was his message of reconciliation, not vengeance, following the end of apartheid that inspired the world. Those of you who were here in last summer remember that we welcomed the Rev. Dr. Allan Boesak of South Africa to our church.

During his visit with us we learned that when the Truth & Reconciliation Commission was established to identify victims of gross human rights violations. Each was invited to give statements about their experiences and some were selected for public hearings. Perpetrators of violence could also give testimony and there was a provision for amnesty from civil and criminal prosecution.

Mandela urged forgiveness for those who imprisoned him and steered the country away from civil war. If our propensity as a human family is to always be at war with one another, Mandela offers us another vision. In fact I would venture to say that he “tweaked” Isaiah’s vision a bit. Isaiah writes of this new leader “with the breath of his lips he shall kill the wicked.” (Isaiah 11:4)

Mandela said “No!” We will not kill; we will forgive.

In 1993, he was awarded the Nobel Peace prize. It was an honor that he shared with F.W. De Klerk, the Afrikaner president who released him from prison three years earlier. In looking back to the day when he was released from prison in 1990, Mandela said: “As I walked out the door toward the gate that would lead to my freedom, I knew if I didn’t leave my bitterness and hatred behind, I’d still be in prison.”

Mandela was imprisoned for 27 years, a third of his life. I have often wondered how he could be so forgiving. It is said by others who were imprisoned with him at Robben Island that he was disciplined in exercising his body and mind and no doubt his spirit. The 27 years were not wasted. He was making ready the vision of hope and peace that was set before him.

It is always time for us to do the same.