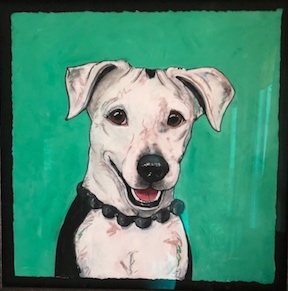 Many of you know Kiko. She has been my canine companion for the last six years and a constant presence here at the church during the work week and on Sunday mornings. Prior to Kiko becoming a part of my life, I welcomed one of her puppies into my life three years earlier on the occasion of my sixtieth birthday. [Ed.: painted portrait of Kiko to the right is by Keawala'i church member Brandis Sarich.]

I decided then that it was time to face my childhood fear of dogs and so early one morning Calvin dropped Hanu off at my home in Wailuku. Kiko was by Hanu’s side when they were separated.

Hanu’s name came from The Book of Ecclesiastes. In a section on judgment and to whom the future belongs, the writer writes: “I said in my heart with regard to human beings that God is testing them to show that they are but animals. For the fate of humans and animals is the same; as one dies, so dies the other. They all have the same breath, and humans have no advantage over the animals; for all is vanity. All to go one place; all are from the dust, and all turn to dust again. Who knows whether the human spirit goes upward and the spirit of animals goes downward to the earth?” (Ecclesiastes 3:18-21).

What struck me is the writer’s observation of human beings and animals. The writer writes: “Ho‘okahi hanu iā lākou a pau. They all have the same breath, the same hanu.” And with that name, Hanu came to be a part of my life. 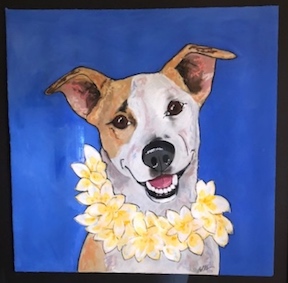 It was four days after the second Sunday of Advent in 2009 that Hanu celebrated his first birth. We would be together for only two more years. He died from seizures not long after his third birthday. [Ed.: painted portrait of Hanu to the right is also by Brandis Sarich.]

For those of you who have come to see the truth in the words of the writer of Ecclesiastes – that animals and human beings all have the same breath – we know that we share the same sorrows when death comes our way. But at least on that second Sunday of Advent nine years ago, sorrow had not yet come my way.

This is what I recalled saying to all of you who were here in worship that joyous morning. “I hadn’t decided what I will do for [Hanu on his birthday] – maybe I would take him for an afternoon swim in the ocean and provide him with a dinner that would include a little more than his regular dry dog food.

If he was capable of talking, I am not sure what he would say it was like for him to live with me over the first year we had spent together. As for me, I figured out pretty early on that the dog training classes [we] attended, the books I [had] read and the conversations I [had] with many of you who have dogs were not for Hanu’s benefit but for my own.

One of the lessons [I] learned [was] about how impatient I could become and how easily that [affected] the way I [interacted] with him. On a couple of occasions, I became so frustrated, I struck Hanu with enough force on his back side to know that what I had done was wrong.

He needed to be disciplined [but] not struck. The sense of remorse that I felt was immediate – occurring long before I even raised my hand. I knew what I was doing.

Some will say that Hanu [was] just a dog. But even as a dog, I [knew] he [did] not deserve to be struck because of my impatience. And if I thought that, I thought about what that says when we strike our children because of our own impatience.

While I know that love at first sight is dangerous proposition to assert, I must admit that when I saw Hanu that morning nine years ago, he looked innocent enough as a puppy that I could never have imagined that there would come a day that he would eat our furniture.

Although our time together was brief, I have absolutely no regrets about my decision to share my life with him. Over time, I came to realize that having had Hanu in my life changed my life and my heart. He taught me that I was capable of being a jerk and that I needed to take a long hard look at myself, from to time, and decide what kind of person I was going to be.

Our reading from The Gospel According to Luke may seem to have very little to do with dogs. But we do learn about how John the Baptizer spent most of his time in the wilderness eating locusts and wild honey. It is unlikely that he would have had anything positive to say about Hanu. In John’s day, dogs were generally despised as outcasts.

Far from being recognized as service dogs capable of caring for their human companions, they were known for ‘their ravenous and ruthless nature and given to prowling and filthy habits. In fact, the Bible contains about forty references to dogs as unclean animals’ (The New Compact Bible Dictionary, Bryant, Zondervan Publishing House, Grand Rapids, Michigan, 1967, page 41).

Hanu may have been “just a dog” to others, but like most dog owners, I know I would be the first to say, “Yes, but he is my dog.” The lesson I learned from Hanu is in some ways the lesson John sought to teach others at the banks of the Jordan River a long time ago.

“Make ready!” That is what John implores at the river and for those of us gathered here this morning.

Make ready! This season of Advent is a time of preparation and it involves more than cleaning and getting out Christmas decorations, buying a Christmas tree, baking and cooking, hosting and attending far too many holiday parties. John the Baptizer reminds us that Advent is a time to prepare to welcome and celebrate the birth of Jesus once more (Feasting on the Word, Year C, Volume 1, Bartlett & Taylor, Westminster/John Knox Press, Lousiville, Kentucky, 2009, page 45).

The preparation requires that we look at ourselves. John challenges us first to repent – to huli, to turn and to change our minds, our way of thinking, to turn around and re-orient ourselves. He proclaims ‘a baptism of repentance for the forgiveness of sins.’

We cannot avoid John’s message of repentance. As we think of all our preparations for Christmas and the lists of things that seem endless, the people we feel compelled to see, the places we are convinced we need to be, the last thought most of us have on our minds is the need for repentance. We would rather that John simply go away – further into the wilderness – out of sight, out of mind. But ‘John confronts us, commands our attention, and demands our response’ (Op. cit., page 47).

We are called to examine our lives, our values and our priorities as we prepare the way to celebrate the birth of Jesus once more. I said that having had Hanu has meant that I’ve experienced a change of life and heart because of him. While Jesus may find it implausible that I would compare my relationship with him to my relationship with Hanu, the truth is I’ve experienced a change of life and heart in knowing both Hanu and Jesus – aware that we all share the same breath.”

Two things happened this week that I want to share with you. First, I received an email letting us know that Calvin, the person who brought Hanu into my life and later his mom Kiko, died. Some of you knew Calvin. From time to time. he would drop by on Sunday mornings to take Kiko on a beach walk. Having spent most of her life with Calvin, Kiko was always ecstatic to see him.

I am not sure what plans there may be for a memorial service for Calvin. We have not heard from his extended ‘ohana. It may be that we will plan something on our own here at the church. Should that happen, we will let you know. 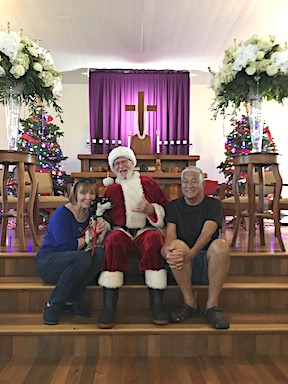 The second thing that happened this week, took place yesterday. We celebrated the eighth annual “Blessing of the Animals” here at Keawala‘i. Over 60 human beings, dogs and one cat gathered to share poems, readings, prayers, a time of remembrance for the animal companions who have died, and a time of blessing for each animal. [Ed.: photo to the right is of Jordan and his family, Taka Harada and Ellen Caringer, posing with Santa Claus in the sanctuary after the blessing.]

As we continue our preparations through this season of Advent, may we find comfort in the words which come to us from The Book of Job (Job 12:7-9). It is a reading that we shared at the blessing yesterday: