There are millions of Christians who believe that the decision made earlier in the week to recognize Jerusalem as the capital of Israel is good news. Many believe that this is a sign that will bring us closer to end of the world as we know it. For many, what happens in Israel today is an important part of the Biblical prophecy some believe will lead to Armageddon, the final great war, and the Second Coming of Jesus Christ. 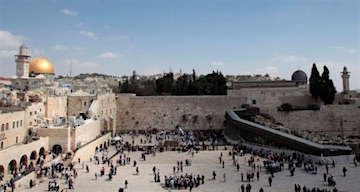 Those who believe in the apocalypse or the “end times” are convinced that a third Jewish temple must be built in Jerusalem on the Temple Mount, which is currently occupied by the al-Aqsa mosque, one of the holiest sites in Islam. The first and second Jewish temples were destroyed by the Babylonians and Romans centuries ago.

There are some who have predicted that the “rapture” is to occur this year. While the word itself appears nowhere in the Bible, some have used it to refer to the description in the apocalyptic references in the Biblical text. Those who are “righteous” will be lifted up into the clouds and out of the great upheaval that is to follow.

Three weeks remain before the year will come to an end and if the prediction holds true there is not much time left. According to one timetable, that will be followed by the great upheaval and the return of Jesus in 2020.

It is not my intention to make light of what other Christians may believe about Jesus’ second coming, but we may want to consider the current political climate in which we live with what was happening in the sixth century BCE and in the first century CE to temper our anxiety and fear of the future. Our reading from The Book of Isaiah was recorded just as the Persian ruler Cyrus had begun his conquest of the Babylonian Empire.

“In its wars with the Babylonians, Judah had been overwhelmingly defeated. Its capital city, Jerusalem, had been captured in 597 BCE and King Jehoiachin and his family taken into captivity in the first Babylonian deportation of exiles (2 Kings 24:1-17). Almost ten years later, Judah was locked again in battle with the Babylonians. This time, in 586 BCE, Jerusalem was destroyed, its walls pulled down, the temple burned, the Davidic family removed from the throne and additional Judeans deported” (Preaching Through the Christian Year B, Craddock, Hayes, Holladay & Tucker, Trinity Press International, Harrisburg, Pennsylvania, 1993, page 8).

The crises of these two traumatic wars is reflected in The Book of Lamentations which tell of the calamities that befell the city. What follows in our reading from Isaiah is the proclamation that the misery and destitution of the exiles were coming to an end and salvation is at hand (Op. cit.)

Isaiah was faced with the burden of convincing the people that rise of Cyrus, a Persian, was the work of Israel’s God – that God was again moving in history and had not deserted the world or the chosen people. He was also faced with the challenge of convincing the people that Cyrus’ conquest would bring a new day for the exiles and the Judeans – that they would be saved and freed from their exile.

In both instances, Isaiah sought to give courage and hope to a desolate and despondent people. That was then.

Today, there are no Persians or Babylonians or Israelites. But there are Israelis and Palestinians and Americans. Over the last several days, violence has erupted across Gaza and the West Bank. Protests have occurred in Egypt, Jordan, Lebanon, Indonesia and other countries.

Surely, some insist the signs are more clearly seen today then at any other time in human history. Jesus is coming soon!

But our reading from The Second Letter of Peter reminds us that there were those in the first century CE who found no pattern of God’s divine intervention in human history that Isaiah proclaimed centuries earlier. After all, they had seen an earlier generation of Christian apostles and leaders, their kūpuna, their ancestors (2 Peter 3:4) die before experiencing Jesus’ return.

Who could fault them for being disillusioned at the prospect that Jesus would ever return? But for the writer of the letter the problem was whether or not their worldview was broad enough to admit that God is able to intervene in human history. “If God can play a decisive role in the beginning of things, it is possible to see the end of history from a similar perspective” (2 Peter 3:5-7). (Ibid., page 11)

But the concern for the writer is not about whether Jesus is ever going to return but about our waiting. It is a concern about expectation and response. “Will it be worth the wait?” and perhaps more importantly, “What should we do in the meantime?”

We ought not assume that God calculates what is to come as we do. It is true that the notion the world would end in a final battle was held in common by many long, long ago. Such cataclysmic battles were familiar in the ancient world.

Given the state of the world today, it would seem that such a battle is likely when we visualize the prospect of a nuclear holocaust. Such a conflagration would destroy the lives of millions of people and lay waste to the land, air, sea and sky of God’s creation. There are Christians who would welcome such holocaust if it will hasten the return of Jesus’ second coming and many of you have heard me say before that I am not one of them.

Our reading from Peter urges us not to worry when he will return, but to “strive to be found by him at peace, without spot or blemish [when he does come] and [to] regard the patience of our Lord as salvation” (2 Peter 3:14-15).

What hope is there for any of us as we wait? What are we to do?

Two remarkable things happened this week. Those who are preoccupied with interpreting Biblical prophecy may be disappointed with both occurrences but they did touch me in two surprising ways.

First, it was reported that “a California man faced the flames of the state’s life-threatening wildfires Wednesday and traversed perilous terrain to rescue a helpless resident – a wild rabbit. The unidentified man, wearing shorts and a red hoodie, jumped up and down in an attempt to lure the rabbit to safety. [He was driving down the highway when he saw the rabbit. He stopped and got out of his car.] Trees and bushes engulfed in flames were just inches away as the man worked to save the cotton-tailed Californian. The rabbit eventually jumped toward the man after a brief chase. The man knelt down, picked him up and carried the rabbit to safety.” (Fox News, Katherine Lam, December 9, 2017)

It is not clear where he took the rabbit. The reporter who videotaped the rescue said that the young man declined to be interviewed.

Second, on Thursday Michael Slager, the former South Carolina police officer who shot and killed Water Scott, was sentenced to 20 years in federal prison. US District Court Judge David Norton made his decision after hearing emotional statements from members of both families.

The shooting in April 2015 reignited “Black Lives Matter” protests across the country after a video was released showing an unarmed Scott running from Slager, who shot him five times in the back. Federal prosecutors sought a life sentence for what they argued was second-degree murder and for obstructing justice by providing the South Carolina Law Enforcement Division with false statements.

The defense attorney argued that while Slager’s action was criminal, it did not amount to murder. The appropriate offense, he said, was voluntary manslaughter. In the end, the judge determined that the underlying offense for Slager was second-degree murder. Needless to say the case has changed the lives of two families forever.

“ʻWe are hurt,’ said Anthony Scott, Walter’s brother, ʻand we do have some type of passion for the Slager family, in that they have to suffer as well. And we do forgive Michael Slager for what he did. But yes, we did want justice for my brother, and we feel that we have gotten a sense of justice” (“Ex-South Carolina cop Michael Slager gets 20 years for Walter Scott killing,” Meridith Edwards & Dakin And one, CNN, December 7, 2017).

Before the sentencing was made, Scott’s mother Judy turned toward Slager and said, “I forgive Michael Slager. I forgive you. I pray for you . . . ” Sitting just a few feet away, Slager wiped tears from his eyes and mouthed, “I’m sorry” (“Michael Slager case: Video key in ex-officer’s stiff sentence for killing,” Meg Kinnard, Associated Press, Friday, December 8, 2017.

You may be wondering what a wild rabbit in California and a sentencing hearing in South Carolina have to do with each other in light of our readings from The Book of Isaiah and The Second Letter of Peter. What hope is there for any of us as we wait for the Lord’s coming?

I saw hope in the young man who stood by the roadside as he attempted to coax a wild rabbit to safety. As exasperated as he was, he held out hope that he could draw the rabbit out of harm’s way - and he did.

The rabbit was saved. Who among us would not welcome being saved from whatever calamity or misfortune may come our way?

What are we to do? Hopefully, we will strive to be a forgiving people. I saw in a man sentenced to 20 years in federal prison a moment of grace as he apologized to the members of the Scott family. Rodney Scott, another brother of Walter Scott, said of Slager, “He called each and every last one of our names in court . . . and apologized. So who are we not to forgive?” (Op. cit.). Who among us would not welcome being forgiven for whatever pain we may have caused others?

What then are we to say of Christ’s return? By striving to be a forgiving people and messengers of hope, may we be found by him at peace, without spot or blemish [when he does come] and [to] regard the patience of our Lord as salvation” (2 Peter 3:14-15).

Let us pray: Loving God, you sent your prophet John to prepare your way among us, to call us to repentance. Strengthen us to live lives of steadfast love and faithfulness as we await the Messiah’s return, that all may see your reign of peace. Mahalo nei mākou e ka Haku maika‘i. E pono aku ka mākou hele ana. We give thanks to you, O Lord, for your goodness. Make right our pathway. Amen.