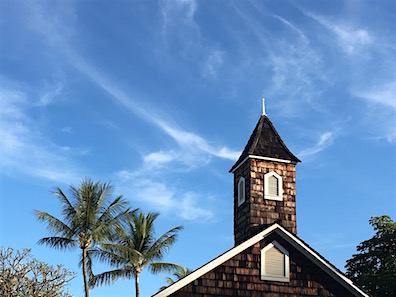 We first became acquainted with each other when their son was married here at Keawalaʻi. In the years that followed I became familiar with her work as a hospice volunteer and with their work together in a village in Nicaragua building schools for children and health centers for families.

They return to Nicaragua each year with a team of volunteers from Maui to continue their work among the poor. We had a chance to see each other again a few weeks ago.

“You must come with us one summer,” he said. It is an invitation that they have both made over the years. “Maybe after you retire,” he added with a smile.

Although I knew about the significant impact their work has had on the lives of the poor, he reminded me that the poor have also had an impact on their lives. “You must come,” he said with encouragement. “Being with them will change your life,” he said in a voice filled with joy.

I wondered how that would be possible. It was not so long ago that Nicaragua had become one of the major proxy war battlegrounds for what was then the Cold War between the U.S. and the Soviet Union. Over course of two decades of civil war over 40,000 Nicaraguans were killed primarily with the weapons provided by Americans and Russians.

Tens of thousands more died in proxy wars in El Salvador and Guatemala. In each country the poor were illiterate. So it made sense that schools and the education of Nicaraguan children became critical once the civil war had come to an end.

I found my thoughts returning again and again to his words of encouragement, words of joy. Our reading from The Gospel According to Luke is about a poor peasant woman named Mary from the tribe of Judah and a descendant of King David who is pregnant with the infant Jesus. The reading is referred to as the Song of Mary and the context in which it is spoken is in the following setting: Elizabeth, the barren wife of the priest Zechariah, has been blessed with a pregnancy in her old age (Luke 1:5-25).

Mary, her relative (Luke 1:36), comes to visit her in an unnamed Judean hill-country village. The two women meet, and Elizabeth’s child, whom we will come to know as John the Baptist, leaps in her womb at the presence Mary who is pregnant with Jesus.

Elizabeth offers praise to Mary (Luke 1:41b-45) and Mary responds. It is very likely that Mary was aware of the song of Hannah that is recorded in The First Book of Samuel (1 Samuel 2:1-10) when she shared her song.

Hannah offered a similar song at the time that she gave birth to Samuel. It was a song offered as a fulfillment of her vows that her son would be dedicated to a life of service in the tabernacle at Shiloh.

As we continue through this season of Advent we are reminded that Mary’s joy is the joy reflective of this time of year. “This joy is expressed, first, in Mary’s recognition of her role in the history of salvation (Luke 1:47-49). God’s mercy and grace are shown not just in the choice of Mary but in the manifestation of God’s mercy from generation to generation.” (Luke 1:50) (Preaching Through the Christian Year, Year A, Craddock, Hayes, Holladay & Tucker, Trinity International Press, Harrisburg, Pennsylvania, 1992, page 20)

The power of Mary’s song should not be lost on any of us today in light of the recent political upheavals in the U.S., Italy, the United Kingdom, South Korea, France, Germany, South Sudan, Yemen, Iraq, Afghanistan, Syria and many other countries around the world. The reversal of fortune that comes with divine action is made apparent: the proud are scattered. Those in positions of power and authority are brought down – some are impeached, others resign.

The lowly, the poor are lifted up – a peasant girl from a Judean village and a peasant boy in a Nicaraguan village. The hungry are filled with good things and the rich, those who boast of their wealth and money, are sent away empty. (Luke 1:51-53) All of this is proclaimed by Mary as a promise made by God long, long ago. (Luke 1:54-55). Is it any wonder that Mary is filled with joy?

“My soul magnifies the Lord, and my spirit rejoices in God my Savior,” is her declaration of joy. That declaration of the joy of salvation is one that is made by the prophet Isaiah in our other reading this morning.

Isaiah announces the return of those who were held captive in Babylon between 587-539 BCE following the fall of city of Jerusalem and the destruction of the Temple. He describes a highway in the desert that blossoms and seems to echo a reversal of fortune akin to Mary’s proclamation.

Now the weak will be made strong, Isaiah writes. The feeble made firm. The fearful will be strengthened. The eyes of the blind will be opened. The deaf will hear. The lame will walk and not only walk but leap and the tongue of the speechless will sing for joy. (Isaiah 35:3-6)

In this season of Advent, we are reminded that the preparation for the coming of Jesus is about our own proclamation of joy. Whether we are immigrants and refugees fleeing the violence and despair of war or those passing through the wilderness of fear and hatred because we look different or speak differently – we may all shout for joy, for we know that it is God who will transform all things.

A former nun and priest return each summer to serve the people in a village in rural Nicaragua. There is no doubt in my mind that they would ascribe the transformation of the lives of the people – from sighing to gladness and from sorrow to joy – not to themselves but to the God of Isaiah the prophet and Mary the peasant.

Let us pray: Holy God, at the dawning of this day new life blossoms with the coming of the Makahiki rains and fresh promise wells up like a spring. As we go forth from this place on this day, confirm our resolve to worship you, strengthen our hands to serve others and keep us always in your holy way. Amen.