Although I returned home to Hawaiʻi in 1991, I found myself waxing a bit nostalgic this week over lyrics to a song recorded several years ago by Sistah Robi Kahakalau and Jeff Rasmussen. It made me think about what happens this time of year for many of our kamaʻāina and malihini who may be away at school or living and working in other states or countries.

Rasmussen and Kahakalau sing, “This time of year the nights become longer and cold winter winds start to blow and the feeling deep inside me is growing stronger returning to the islands is all I know.” And then the refrain: “I’m coming home for Christmas once again. It’s been too long away from those I love and all the memories of Christmases before.”

“When the Christmas lights rise up in the city and the first snowflakes fall to the ground, I keep warm with my thoughts of Hawaiʻi – to the islands I’ll be homeward bound. The sea, the sun, the magic of aloha calling me and soon I’ll be home for Christmas once again.” 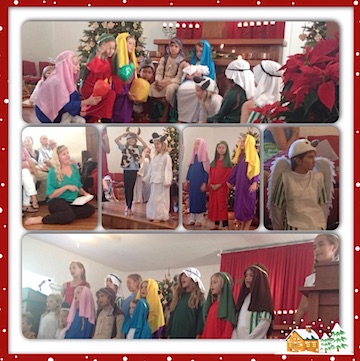 As the years go by, I have become more and more aware that Christmas has been and will always be more than being with and remembering those we love. Returning home for Christmas is about finding our way back to the place where a child was born, a child whose name is “Emmanuel” – which means: “God is with us.” (Matthew 23)
[ Photos in this collage were taken by Karen Rollins during the children's program part of this morning's 10 a.m. service; and which she later posted to the church's Facebook page. ]

As we continue through this season of Advent and our preparations for Christmas, it would seem to some that our reading from The Gospel According to John is a bit of an odd choice. Unlike the stories of the birth of Jesus recorded by Matthew, Mark and Luke, there is no birth story in John’s account of Jesus’ life.

The Rev. Dr. Barbara Brown Taylor notes: “A Christmas pageant based on the Fourth Gospel would feature one child, speaking one line, in front of a curtain: ‘And the Word became flesh and lived among us, and we have seen his glory, the glory as of a father’s only son, full of grace and truth.’” (John 1:14) (Feasting on the Word, Bartlett & Taylor, Westminster/John Knox Press, Louisville, Kentucky, 2008, page 69) That’s it. Pau. The pageant is over for another year.

But Taylor goes on to point out that what we have in our reading from The Gospel According John, is not a Christmas pageant but an Advent pageant. There is only one character in the story. There are no sheep or goats or camels. There is no manger, no Mary, no Joseph, no baby Jesus. There are no angels or shepherds or wise men.

He is simply John – a man with a fondness for dressing in camel’s hair and a leather belt and an appetite for locusts and wild honey – not exactly the kind of person one would have expected announce the coming of the Messiah. Yet Matthew, Mark, Luke and John are all compelled to give attention to John in order to help us see John’s role in relationship to Jesus.

John was a forerunner to Jesus and it is in that role that we see his greatness. Matthew says that although John baptized Jesus he was hesitant to do so, saying he should be baptized by Jesus (Matthew 3:13-15). Mark cites John’s acknowledgement that Jesus is “more powerful than I” (Mark 1:7) and contrasts the baptism of John with water and the baptism of Jesus with the Spirit.

Luke weaves the stories of the births of John and Jesus, and tells us that when Mary, who is pregnant with Jesus, entered the house of her cousin Elizabeth who is pregnant with John, that John leaped in Elizabeth’s womb in recognition of Jesus. (Luke 1:39-45) (Preaching Through the Christian Year B, Craddock, Hayes, Holladay & Tucker, Trinity Press International, Harrisburg, Pennsylvania, 1993, page 19)

In our reading today, John is presented twice – first by the writer of the gospel (John 1:6-8) and then by John himself (John 1:19-28). In the first instance we are made aware that while it is true that John was sent by God, he was not the Word or the light come from God. John was not the true light coming into the world. Instead John is called “a witness” several times. (John 1:6-8, 15)

It is this aspect of John’s life that begins to trouble the religious authorities of his day. Who is this man, they wonder, who is making all this noise about a light that has come into the world? By whose authority is he baptizing people to help them see this light? How is that so many are responding to him and following him? (Feasting on the Word, Bartlett & Taylor, Westminster/John Knox Press, Louisville, Kentucky, 2008, page 69)

In this second instance, the priests and Levites from Jerusalem are sent to question John. “Who are you?” (John 1:19) They want him to say who he is but John chooses to tell them who he is not. He is not the Messiah or Elijah. He is not a prophet.

The priests and Levites press John further, “Who are you? What do you say about yourself?”

In this season of Advent, Gary Charles, a Presbyterian pastor, reminds us as did Dr. Taylor that our reading “does not offer images of a young family on a holy trek to Bethlehem.” Again, there are no shepherds and no angels to be heard on high. There is no grumpy innkeeper. There are no magi come from a distant country. (Ibid., page 73)

There is nothing in our reading to entice us into romanticizing Christmas and to obscure the power of the good news of Advent. We are reminded that the first witness to Jesus, the first to declare to others of his coming was a man who was born before Jesus was born.

His name was John, simply John. He did not come to decorate everything and to get everyone ready for Christmas.

He came to “prepare the way the Lord.” (Isaiah 40:3) “He came to ‘bear witness’ to the coming Light of God,” born on Christmas day, “reminding all who would listen that the darkest forces in the world are not finally as powerful as they appear. He came to bear witness that the most enchanting words spoken by forces of darkness lose their charm when measured against the ‘Word (who) became flesh and lived among us . . . full of grace and truth.” (John 1:14)

John sensed that his own time of waiting was coming to an end – that “one who is coming after” would soon arrive (John 1:27) “to bring good news to the oppressed, to bind up the brokenhearted, to proclaim the liberty of captives, and release to the prisoners . . . to comfort all who mourn . . . ” (Isaiah 61:1; Luke 4:16-19) Like John, we too are witnesses to the light of the Christ child. We are not the light but we are have come to bear witness to the light.

Returning home for Christmas is about finding our way back to the place where a child was born, a child whose name is “Emmanuel” – which means: “God is with us.” (Matthew 23) It is right and good for us to cherish our memories of Christmases before and of those we love. But the great, great joy of all our Christmases is not that we loved God but that God first loved us and sent us a child to show us the way – home.