"Changing our minds and hearts" 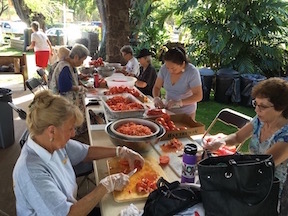 But what I read sounded familiar in light of my own experiences of growing up in the church and going to church camp. A review of the film noted, “It’s a camp where crying children are made to repent of their sins.” (“My Jesus Camp: Fond Memories,” Jason Byassee, Christian Century, November 28, 2006, page 11)

I must confess to you that I’ve had those tearful moments as a child and as a young adult. But they were also terrifying moments of feeling that if I was not willing to get up out of my seat and walk down the aisle that I was destined to live a life burdened by God’s judgment and punishment.

“Repent of your sins, be forgiven and be baptized!” And though it was not said it was somehow understood that if anyone refused then one ought to be prepared to “kiss-your-you-know-what-goodbye.”

I suspect many of those who were in the crowd that came to be baptized by John centuries ago were afraid if not terrified. To say that John must have sounded harsh and over–the-top when he first accuses those in the crowd of being unworthy would clearly be an understatement.

“You brood of vipers!” he says to them. “You’re all just a bunch of snakes. You come because someone has warned you that if you don’t shape up you will have hell to pay. It’s not enough to say you have your ancestors. It is not enough to say, ‘Ah, I have my kūpuna.’”

Instead, John says to the crowd that had come to be baptized by him, “Bear fruits worthy of repentance because every tree . . . that does not bear good fruit will be cut down and thrown into the fire.” (Luke 3:8-9)

Talk about pressure. It is like saying, “Auwē, we’re out of luck. There’s no hope for us.”

Many in the crowd were distressed. John senses their distress when they ask him, “What then should we do?”

Although John’s call for repentance is a demanding one, he is gracious in extending his call to everyone. Because he associates repentance with the need to make certain that one’s actions reflect a genuine change in behavior and attitude, John responds by telling those in the crowd, if you have two coats, share one with someone who has none. If you have food, share your food with someone who has none.

Then he responds to the tax collectors, “Collect no more than is necessary.” And then he says to the soldiers, “Do not extort money from anyone by threats or false accusation.” (Luke 3:12-14)

I suppose all of what John said may have caught many in the crowd and especially the tax collectors and soldiers by surprise. Perhaps most came to him believing that they were about to meet their doom. God’s judgment and punishment was surely at hand. But even God’s judgment and punishment can be good news when repentance and forgiveness are available. That is the good news that John proclaims.

A biblical scholar observed, “John is not simply a loud evangelist whose screamings do little more create fear and reduce a pathetic crowd to a pool of guilt.” (Preaching Through the Christian Year C, Craddock, Hayes, Holladay, & Tucker, Trinity Press International, Harrisburg, Pennsylvania, 1994, page 18) Each group asks in turn, “What should we do?” And John responds not with words of condemnation but words of encouragement.

This is the same question that is asked by the crowds on the day of Pentecost when they hear Peter preaching (Acts 2:37). The answers John gives addresses the inequities and injustices of the society in which the people lived: food and clothing are to be shared with those who have none; taxes are not to be based on the greed of the powerful; and the military must stop victimizing the public by threat and intimidation. We would not be far off the mark to say that such inequities and injustices exist today in countries around the world, including our own.

In order to fully appreciate John’s proclamation of the good news it is important for us to understand that the word repentance covers a range of meanings - from regret to turning back or turning around to changing one’s heart and mind. The Hebrew word nahum that is used in the Old Testament conveys this sense of regret. (Harper’s Bible Dictionary, Paul J. Achtemeier, Harper & Row Publishers, San Francisco, 1985, page 861)

Another Hebrew word shub expresses the idea of turning back, turning around and trying to retrace one’s steps in order to return to the right way. Centuries ago the people were more aware of their collective guilt as a people rather than their guilt as individuals. The prophets warned the people time and time again of their need to remain faithful to their covenant with God.

Centuries later the Greek verb metanoein came to express the understanding that repentance is a turning to God that requires the actions of an individual. The Greek influence in the New Testament is evident. The person has to change his or her mind and come to a new way of thinking.

But repentance is more than changing one’s mind. Repentance is also a change of one’s heart and it is a change we see evidenced in a person’s action and attitude.

These words of encouragement provide us with the kinds of actions we may take and the kinds of attitudes we must have if our repentance – the changing of our hearts and minds – is to be authentic. Earlier in the week I received one of those text messages which ended with the invitation, “If you like this, pass it on.”

The message was basically a complaint about how, as a nation, we seem to care more about other people in other countries more than about our own country and our own people here at home. And so some have decided to declare to the world: “Just because you are a victim of domestic violence is not reason enough to seek asylum in our country. We do not want strangers taking our jobs away. We only want the best and the brightest and it helps if you have money.”

But even here at home, we complain. “Food stamps are a waste of money. People on welfare are lazy. There are lots of jobs. You need to get a job. Why should we provide health care for the poor? Single mothers should stop having babies.”

As we continue our Advent preparations in celebration of the birth of the Christ Child we are aware of John’s response to those who questioned whether he might be the Messiah: “I baptize you with water,” he said, “but one who is more powerful than I is coming. He will baptize you with the Holy Spirit . . . ” (Luke 3:16).