I remember it well. As the first-born and oldest of five siblings the time came when changing diapers was on the list of responsibilities I had to bear. The diapers were made out of cotton and had to be folded and held in place with two safety pins.

There were no designer diapers lined with plastic and held together with Velcro. Nope! The diapers and safety pins would require a level of dexterity and skill that marked my early teenage years. 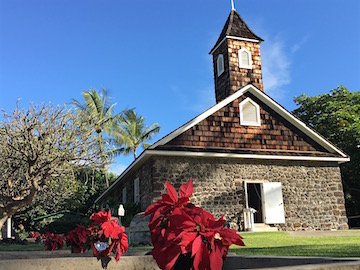 The baby powder was a necessity especially if someone was not only wet but stinky. It was a messy, messy business but it had to be done and my mom and dad were often busy enough with others matters that required their more immediate attention.

Out of the mess love emerged. Not surprisingly, it would not be until years later that I would realize changing diapers was less about developing dexterity and skill with safety pins and more about caring for others unable to care for themselves.

Our reading from The Gospel According to Matthew begins: “Now the birth of Jesus the Messiah took place in this way . . . ” (Matthew 1:18a) and almost immediately we are confronted with a mess. Katie Hines-Shah serves as the senior pastor at Redeemer Lutheran Church in Hinsdale, Illinois. She points out, “As Joseph enters the story, we are primed to hear of Jesus’ genesis” (or beginning) “in a new kind of way. By the time” (Joseph), “a direct descendant of Abraham finds his betrothed pregnant with a child not his own, the messiness of family life has been well established.” (“Reflections on the lectionary,” Katie Hines-Shah, Christian Century, November 23, 2016, page 23)

Matthew seems somewhat timid in his pronouncement of the unorthodox pregnancy by simply letting us know that she has been “found to be with child.” Talk about a mess and we are not at the point of having to deal with a wet or stinky diaper.

It took an angel in a dream for Joseph to realize what others may have already known. What to do? For Joseph, the options do not look good.

Joseph knows that because he is already betrothed to Mary, he is in fact her husband and she is his wife. Being betrothed is not an engagement to be married in terms of what we understand today.

Joseph and Mary already share a legal bond that could be broken only by divorce. (Matthew 1:19) (Preaching Through the Christian Year, Year A, Craddock, Hayes, Holladay & Tucker, Trinity Press International, Harrisburg, Pennsylvania, 1992, page 28) While she may not be stoned to death, under Levitical law if Joseph divorced her, she would in all likelihood end up destitute and if others perceive Mary as an unfaithful woman and Joseph remains with her, he himself would be tainted by her apparent sin of adultery. That would only be the beginning of the mess.

If Joseph decides to remain with Mary, he runs the risk of nurturing and caring for a child who will lay claim to an inheritance that is not his to claim. In other words, Jesus stands to inherit the birthright of Joseph’s own biological child and that cannot be.

Just as Joseph is about to dismiss Mary quietly, an angel appears to him in a dream. We know from Matthew’s account that Joseph was profoundly troubled that Mary was hāpai with a baby boy that was not his son.

Katie Hines-Shah is convinced that neither Joseph nor Mary sought or expected to become parents before they lived together. “The very existence of this child,” Hines-Shah concludes, “may well threaten their community, their synagogue, their families. Their own relationship may be broken before it has even begun.” (“Reflections on the lectionary,” Katie Hines-Shah, Christian Century, November 23, 2016, page 23)

Messy, messy, messy. But Joseph makes the decision to hānai Jesus, to accept and to raise and to love Jesus as his own son.

We live in a messy and broken world and these days it may seem even more so. But amid the mess, we see the love of God break forth time and time again.

In December of 1993, a brick was thrown through a bedroom window of a 5-year-old Jewish boy in Billings, Montana. He was setting up a display of a menorah, a candleholder with nine candles, to celebrate Chanukah.

Throughout the year white supremacists began moving into the area and sending hate mail, making death threats and vandalizing the homes of Jews, Native American Indians and African Americans. Of the 80,000 residents in Billings at that time, there were around 50 Jewish families.

It is said that the Native American Indians and African Americans faced their share of hostility. When Margaret MacDonald, the executive director of the Montana Association of Churches, learned what had happened she called her pastor at the First Congregational United Church of Christ to express her concern.

Soon afterwards, the Sunday School students made paper menorahs for their windows at home. The following week hundreds of menorahs appeared in the windows of local Christian families, then thousands.

MacDonald was moved to do something because she wondered about her own family, about what she would tell her children if they were told not to put a Christmas tree or a Christmas wreath in their home because it might cause someone to attack them. She recalled an event in Denmark in World War II when the Nazis ordered all of the Jews to in the country to wear a yellow Star of David so they could be easily identified. The King of Denmark and others who were not Jewish began wearing a yellow star themselves. The Nazis were not able to easily identify the Jews.

Out of the mess of racial and religious bigotry, love flourished.

In December of last year, “members of the militant group Al Shabab based in Somalia, ambushed a bus in neighboring Kenya. The militants ordered the passengers out of the bus so that they could single out the Christians for execution. But the Muslims on the bus refused to comply. Instead they helped hide the Christian passengers and told the attackers that they would have to either kill everyone on the bus or leave. The militants left.” (The Christian Science Monitor Weekly, August 29, 2016, page 34)

Acts of cruelty of any kind based on gender, sexual orientation, race, religion, age, ability, and class have no place in the kingdom of God. Speaking out against such cruelty requires our vigilance and our commitment to make certain that courageous acts of kindness and compassion, care and respect do not go unnoticed.

I received a Christmas card this week. There is an angel on the cover looking toward a manger where a baby lay. The cover reads “Love was born at Christmas.”

I know that! You know that! That is what we proclaim to the world. Love was born at Christmas – not in a clean antiseptic ward of a hospital or in the warm glow of candlelight or on s moonlit night - but in a manger surrounded by the messiness of sheep and camels and a newborn baby boy named Jesus whose diaper needed changing.