“What Mary Came to Know”

Aloha! Some of you have been on the receiving end of e-mails detailing my most recent bout with a kidney stone and a recurring flare-up of my prostatitis. On at least three previous occasions I managed to pass the stones.

But over a month ago, a 7 millimeter stone lodged itself just outside one of my kidneys. The initial pain has subsided but the stone is basically paʻa – it’s stuck and it is not going anywhere anytime soon.

A surgical procedure earlier this month to remove the stone was partially successful. Unfortunately, it aggravated my prostatitis and as a consequence, I returned to the clinic the next day for a catheter. It was removed a week later.

However, less than 2 hours had gone by when it became apparent that another catheter was needed. Despite the two setbacks, I realize that I have become a member of a distinct group of men who know about debilitating effects of bladder spasms and the rest.

It is a bit of cliché to say that having “a kidney stone is like giving birth to a baby.” Women have said so; other men have taken the comparison to heart. Some have confessed that if God decided men would be the ones to give birth to children it would have been a very, very bad decision. The pain would be too much for men to bear and human beings would quickly disappear from the earth.

But if having a bout with kidney stones is any indication of pain and discomfort, I have become more profoundly appreciative of the joy, not the pain, of the women who make it possible for the cycle of life to continue from generation to generation. That joy is apparent in our reading from The Gospel According to Luke. 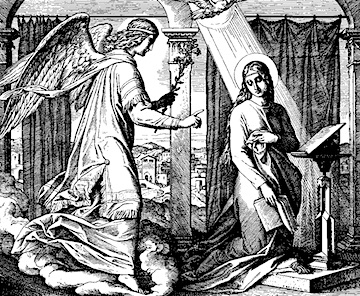 We are not told why she set out so quickly, but within the context of the story come to realize that Mary made her decision in a moment of joy, aware that something miraculous was happening to her. She is hāpai. She is pregnant, carrying within her womb a child whose name will be called Jesus.

Elizabeth is also hāpai. She is pregnant with her son whom she will name John. Both will grow up and come to face to face as young men when Jesus makes his way to the Jordan River to be baptized by John.

As Mary approached Elizabeth’s home, it is said that the child in Elizabeth’s womb recognized Mary’s voice and leaped in response. If Mary and Elizabeth lived here on Maui, I can only imagine Mary calling out from a distance to announce that she was approaching Elizabeth’s hale – “Hūi!” “Hūi!” “Hūi!”

What a wonderful encounter it was for both women – a moment filled with great, great joy. Yet, we know that there will be a moment of pain for both Elizabeth and Mary as they experienced the death of their sons.

Both John and Jesus will die at the hands of religious leaders and politicians and others afraid of the loss of their positions of power. But for now there is only joy.

Unfortunately, we are not good at listening. Ongoing political debates, regardless of the party, make that evident as we look at our national life. But we will open our ears and give heed to those whose voices which are seldom heard or often silenced.

Today, we join our voices with Mary’s voice. Our souls magnify the Lord, and our spirits rejoice in God our Savior, for God has looked with favor on our lowly service to the One whose birth we anticipate once more.

As this season of Advent comes to end, we are reminded once more: