A few years ago I returned to Kona on the island of Hawaiʻi to attend a week-long meeting. While there I decided to stop by the house I grew up in as a child. The house is still there along the old belt road in Keauhou mauka on the slopes of Hualalai. It is now bent over in disrepair by the weight of passing years. 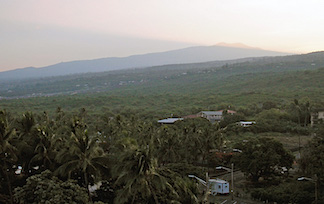 After my uncle’s death, the house was left vacant. A variety of bugs and insects have taken up residence and the vegetation has found its way into the house through open spaces in the walls and on the lower floor.

The front door was closed and the windows boarded up but I knew where the other entrances were to the downstairs kitchen area. Gaining entry into the house was quick and easy since the termite-ridden doors had abandoned their attachment to the door frames a long, long time ago.

I walked through the house and into each room – the room where tūtū died; the room where I slept with my cousins; the kitchen where we ate our meals; the hale ʻauʻau where we would wash up; the corner of the parlor where the Christmas tree stood each year. As I turned to leave that day I realized the house was still there but it was no longer a home.

Over the course of the last two Sundays our time of worship has focused on returning home and finding our way home. This morning our focus is on being at “home.” Our readings from The Second Book of Samuel and The Gospel According to Luke provide us with a lesson about house and home and the distinction between the two. God’s word to the prophet Nathan and the angel Gabriel’s word to Mary makes that distinction.

No longer troubled by his enemies, David as king decides it is time to build a house for God. He is concerned that the ark, the symbol of God’s presence, was left to reside in a tent in Jerusalem. (2 Samuel 6:17). His desire to build a house for God is contrasted with God’s promise to establish an everlasting covenant through David’s descendants and for all generations.

With the help of a Phoenician king, David had constructed a great palace made of cedar for himself and so he proposed that a temple be built for God. At first the prophet Nathan approved of the temple construction David proposed, but after a night time consultation with God, he withdrew his approval.

Nathan reminded David: “Thus says the Lord: I have not lived in a house since the day I brought up the people of Israel from Egypt to this day, but I have been moving about in a tent and a tabernacle. Wherever I have moved about among all the people of Israel, did I ever speak a word with any of the tribal leaders of Israel, whom I commanded to shepherd my people Israel, saying, ʻWhy have you not built me a house of cedar?ʻ” (2 Samuel 75-7)

In Samuel we read that God’s covenant with the David is not about building a house but about keeping a promise of steadfast love and faithfulness to all generations. Psalm 89 celebrates that covenant while calling on God not to forget.

Luke tells us that God did not forget and sends Gabriel to tell Mary that through her, the promise of God’s covenant with David will be kept through the birth of the Christ Child. (Preaching through the Christian Year B, Craddock, Hayes, Holladay & Tucker, Trinity International Press, Harrisburg, Pennsylvania, 1993, page 21) “Gabriel tells Mary that her womb will become a home for the one who will fulfill the divine word given to Nathan so long ago.” (“Living the Word,” Wes Avram, Christian Century, December 10, 2014, page 20)

We are reminded that the assurance of God’s presence in our lives and in our world is not to be found in a tent or a temple or a building, but in the promise of God’s steadfast love and faithfulness. The Rev. Wes Avram, senior pastor of the Pinnacle Presbyterian Church in Scottsdale, Arizona writes: “We make a home in the world for the hope” we find in the birth of the promised One. “We make this home in order to remember – to let the promise be born among us, grow among us, and bring us a future if it will. We find faith in trusting that it will.” (Op. cit.)

I took photographs of the house I grew up in as a child the day I stopped by for that visit a few years ago. In the photographs, the walls of the house looked weathered by the rain and the sun. One could see the effects of the weight of time over the passing of sixty years.

Since that day, I have come to the greater realization that the house and its rooms were never the substance of what made the house a home. Home was spending time with family; home was being with each other in moments of sorrow and loss; home was celebrating birthdays and Christmases with one another; home was the place where relationships were nurtured; home was where hopes and dreams were shared.

God said, “I have made a covenant with my chosen one, I have sworn to my servant David: ‘I will establish your descendants forever, and build your throne for all generations.” (Psalm 89:3-4) And the angel Gabriel said to Mary: “...you will conceive in your womb and bear a son and you will name him Jesus. He will be great, and will be called the Son of the Most High and the Lord God will give to him the throne of his ancestor David.” (Luke 1:31-32)