"My soul magnifies the Lord" 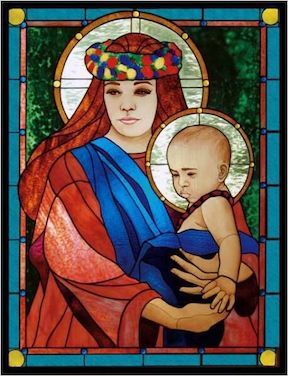 The Rev. Austin Crenshaw Shelley is an Associate Minister for Christian Education at the Presbyterian Church of Chestnut Hill in Philadelphia, Pennsylvania. On the day of her ordination into the Christian ministry, she was far enough along in her pregnancy to feel her unborn daughter kick for the first time.

Since that day, she said motherhood and ministry have become intertwined. “I am a mother,” she said, “and because of the depth of the bonds I share with my children, I cannot read or interpret the Bible otherwise. I am drawn to its mothers – named and unnamed, those who stories are woven into the biblical narrative and those whose stories are hidden between its lines.”

“I weep with Hagar as she fears her son Ishmael will die in the desert (Genesis 21:16). I sin praise with the psalmist who compares her contented soulto the disposition of a child who has nursed to its fill (Psalm 131:2). I demand justice alongside the Syrophoenician woman who begs Jesus to heal her daughter (Mark 7:26, Matthew 15:22). And especially during Advent, I rejoice with Elizabeth and Mary as they await the births of John and Jesus . . . ” (Reflections on the Lectionary: Luke 1:39-55, Austin Crenshaw Shelley, Christian Century, November 21, 2018, page 21).

I am appreciative of Shelley and the mothers in our lives whose joy has given birth to each succeeding generation. That joy is apparent in our reading from The Gospel According to Luke.

We are not told why she set out so quickly, but within the context of the story we come to realize that Mary made her decision in a moment of joy, aware that something miraculous was happening to her. She is hāpai. She is pregnant, carrying within her womb a child whose name will be called Jesus.

Her cousin Elizabeth is also hāpai. She is pregnant with her son whom she will name John. Both of their sons will grow up and come to face to face as young men when Jesus makes his way to the Jordan River to be baptized by John.

As Mary approached Elizabeth’s home, it is said that the child in Elizabeth’s womb recognized Mary’s voice and leapt in response. If Mary and Elizabeth lived here on Maui, I can only imagine Mary calling out from a distance to announce that she was approaching Elizabeth’s hale – “Hūi! Hūi! Hūi!”

What a wonderful encounter it was for both women – a moment filled with great, great joy. Yet, we know that there will be a moment of pain for both Elizabeth and Mary that they will come to experience through the traumatic deaths of their sons.

John and Jesus will die at the hands of religious leaders and politicians and others afraid of losing their power. But for now there is only joy.

Unfortunately, we are not good at listening. Today, ongoing political debates, regardless of the party, make that evident as we looked at our national life. But we will open our ears and give heed to those whose voices are seldom heard or often silenced.

Today, we join our voices with Mary’s voice. Our souls magnify the Lord, and our spirits rejoice in God our Savior, for God has looked with favor on our lowly service to the One whose birth we anticipate once more. As this season of Advent comes to end, we are reminded once more: