In 1992 the double-hulled canoe Hōkūleʻa set sail for the island of Rarotonga, relying upon the ancient navigational skills of our Hawaiian ancestors. Being aware of the ocean topography with its winds and currents and the night sky with its myriad of stars, they were able to find their way across the great expanse of an ocean. 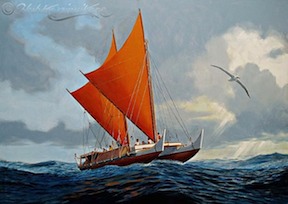 One night Hawaiian ocean navigator Nainoa Thompson spoke via satellite phone with Lacy Veach, a NASA astronaut who was orbiting the earth on the space shuttle Columbia. Nainoa and Lacy grew up in Hawaiʻi and both attended Punahou School in Honolulu.

Nainoa invited Lacy and two other astronauts to join the canoe crew on the last leg of their return voyage from Molokaʻi to Oʻahu. Later Nainoa and Lacy would share their vision of Hawai’i with each other over the kitchen table at the home of Pinky Thompson, Nainoa’s father.

Nainoa remembered Lacy’s vision. “(He) was asleep, stuck to the wall with Velcro, when another astronaut woke him up. ‘Come and look out the window. We’re passing over Hawaiʻi,’” he said.

Lacy looked out the porthole of the shuttle. The sight of the islands took his breath away. He saw the islands and the planet in one vision – that the earth was an island like the islands of Hawaiʻi but in an ocean of space, and that we needed to take care of them both if the planet was to remain a life-giving home for humankind.

Nainoa and his father Pinky both shared the assessment that Hawaiʻi was heading toward an unsustainable future with its dependence on outside resources. As they sat at that kitchen table, Pinky said that if the knowledge and values that enabled Hawaiians to care for Hawaiʻi and her surrounding waters for nearly 2,000 years through the care and management of natural resources to sustain a large, health population, then the Hōkūleʻa must embark on a journey to share that knowledge and those values with the world.

From their visions emerged a single vision of a double-hulled canoe known as the “star of gladness.” The canoe would bridge the communities and cultures of the world to find a way to mālama, to care for the earth and her people.

Centuries ago another star led travelers on an epic journey but this time across the great expanse of a desert. The Star of Bethlehem would lead the magi from the East to the birthplace of the baby Jesus. Upon arriving in Jerusalem the magi met Herod, the king of Judea, and were told to go to Bethlehem, a nearby village.

The star led them to the place where they found the baby Jesus. Once there they kneeled, paid homage to him, and offered him gifts. The magi had relied upon a star rising in the East to guide them.

Ever since that night, scholars and scientists have debated about whether or not the Star of Bethlehem was a divine sign of a special birth or if it was an astronomical event in its own right. Some scientists have said that a rare series of planetary groupings, known as conjunctions, may have led to a rare celestial event.

Others have attributed the bright appearance of a star to a passing comet and still others speculate that the Star of Bethlehem was a supernova or hypernova occurring in a nearby galaxy.

Some Biblical scholars see the story of the birth of Jesus as an account created to establish that he is the Messiah of whom the prophets spoke. As such they contend that the Star of Bethlehem was made up to embellish the story of a nonetheless remarkable moment.

After all why would they need a star to guide them ten kilometers from Jerusalem to Bethlehem? Our reading from The Gospel of Matthew is the only one of the four gospels which mentions the Star of Bethlehem. The author of The Gospel of Mark does not appear to be aware of the story of Jesus’ birth in Bethlehem.

In The Gospel of John there is a reference that Jesus is from Galilee, and not Bethlehem. There are also references that often described Jesus as “of Nazareth” but never as “of Bethlehem.”

Whatever one may say about the star or about the place of Jesus’ birth, what matters is what an angel said to Joseph in a dream. “Mary will bear a son, and you are to name him Jesus, for he will save his people from their sins.” (Matthew 1:21)

The people will also name him Emmanuel, which means “God is with us.”

The vision Nainoa and his father Pinky shared with Lacy is that the Hōkūleʻa – the “Star of Gladness” – will venture forth to distant lands to share the ways in which we are to mālama the earth; that is to care for the earth and all people.

On a night such as this, the Star of Bethlehem is our Hōkūleʻa - our Star of Gladness – a star that calls us to go forth from this place to share the good news that God so loved the world that God gave to us a child born of Mary whom Joseph named Jesus that we may also care for the earth and all people.