[ ...with Kainoa Gates of Kahakuloa, Maui, who joined Kahu in sharing
the evening message by reciting the passage from Luke 2:8-14 ]


Aloha and welcome to Christmas Eve!

I got up this morning, took a deep breath and walked outside my front door to see rain falling in Wailuku. I made my way to the fishpond in my front yard.

I paused for a second and watched as over four dozen orange-colored fish scrambled to the surface in a frenzy for their morning feeding. At that moment I realized that holiday season can often feel like a frenzy – folks jostling one another on shopping expeditions, oblivious to others and sometimes leaving others watching in bewilderment. 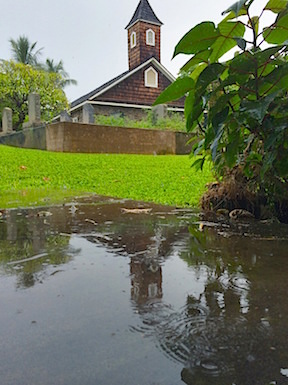 That realization was made all the more vivid as we began our preparations for tonight over four weeks ago when we gathered on a quiet Sunday evening to mark the start of the season of Advent. Advent comes to an end tonight but not before we all catch our breaths and wonder what the frenzy was all about.

The Rev. Lillian Daniel, a United Church of Christ pastor, reminds us that even in the church, we have taken on the rhythm of the world, scurrying about and over-scheduling ourselves. She writes, “In a season that is gear[ed] up to shop, we [ought to] consider what it would mean to stay away and engage the natural world, rather than the world of neon malls and sales. This life [that we are living now] is precious and unpredictable. Its seasons are short. Let us not have it slip away,” she cautions, “only to realize that we spent it shopping.”

My mother was neither a writer nor a poet but she was an orator of sorts who had a way with words. Simple words.

“Remember,” she would say to me as our family gathered for Christmas each year, “Keep still!” With childhood cousins and neighbors aplenty, it was easy for us to lose ourselves away from the adult conversations and into our world of play. “Running around” seemed to be the constant order of the day and evening.

I suspect if our running around had a purpose, my mother would have been less inclined to demand that I slow down. Inevitably someone would fall and skin a knee and the running would abate for a moment or two only to resume for everyone except the one sidelined by the skinned knee.

Some of the mishaps were more predictable. I was asthmatic as a child and my mother could always anticipate that my stubbornness would eventually lead to a wheezing episode and the need for me to catch my breath.

For some reason her more commanding voice would occur just before the wheezing episode ensued. “Keep still!” she would shout across the yard.

By that point I had the look of someone who had run a marathon. Of course, my mother sounded like she took no pleasure in reminding me, “And what did I tell you?”

As a child, I always felt that her determination to curtail my “running around” was a judgment and a punishment as though she were saying that I was incapable of keeping still and that the consequence would be my inability to breathe properly. Over time I have come to realize that it was neither a judgment nor a punishment that my mom sought to convey, but her love and concern.

There is no doubt in my mind that on this night there will be children “running around” somewhere. There is no doubt a voice will be heard, “Keep still!” – not so much as a warning but a reminder that on a night such as this we remember and anticipate once more the gift of the Christ Child born in the City of David.

It is very easy for us to lose sight of what Christmas means when we are consumed by the need to shop. Not too long ago there was a radio interview about the musical animated television special, “A Charlie Brown Christmas.” I was 16 years old when the program made its debut on CBS on December 9, 1965.

In the special, Charlie Brown finds himself feeling depressed despite the start of what should be a cheerful holiday season. He expresses his dismay to Linus but is quickly dimissed by him. He is then put down by Violet when he attempts to sarcastically thank her for a Christmas card she never sent to him.

He confides in Lucy about how he is feeling and it is Lucy who recommends that he direct the Christmas play. Charlie Brown agrees. As he makes his way to the auditorium he is dismayed by Snoopy and Sally who seemed more concerned about Christmas decorations and gifts of money.

The rehearsals turn out to be a disaster. Everyone insists that the play needs to be modernized. Charlie Brown decides to get a Christmas tree to set the “proper mood.”

Linus accompanies Charlie Brown in his quest to find a tree. The tree that Charlie Brown finds turns out to be a sapling, not exactly the kind of tree Linus had in mind. Back at the auditorium, everyone laughs and ridicules Charlie Brown about the tree.

“And there were in the same country shepherds abiding in the field, keeping watch over their flock by night. And, lo, the angel of the Lord came upon them, and the glory of the Lord shone round about them, and they were sore afraid. And the angel said to them, ‘Fear not, for, behold, I bring you tidings of great joy, which shall be to all people. For unto you is born this day in the city of David a Savior, which is Christ the Lord. And this shall be a sign unto you: Ye shall find the babe wrapped in swaddling clothes, lying in a manger.” And suddenly there was with the angel a multitude of the heavenly host praising God, and saying ‘Glory to God in the highest and on earth peace and goodwill towards men.’” (Luke 2:8-14)

MaryAnn Jindra wrote the lyrics to the anthem, “Lord, Before This Fleeting Season.” Let me offer them now as a prayer for our time together.

Lord, before this fleeting season is upon us,
let [us] to remember to walk slowly.

Lord, bless my heart with love and with quiet.
Give [our hearts] a leaning to hear carols.

Grace [our families] with contentment,
Ah, and the peace that comes only from you.

May our hearts be your heart.
May we simply, peacefully celebrate you, Lord.