“As the seasons come and go” 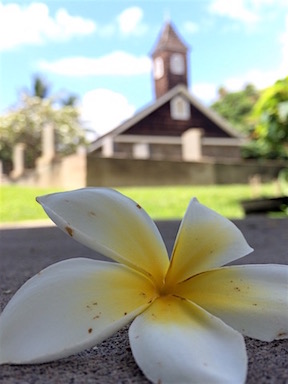 With each passing season, I have seen the rhythm of my own life changing. As I grow older and as I watch our children grow up, I have come to appreciate this time of year and what it means to see the passing of one generation and the birth of another.

Auntie Caroline DeLima was one of our senior members when I was called to serve Keawalaʻi twenty five years ago. She was born in 1917 in Honolulu. Uncle Abner, her husband, was born in Ulupalakua in 1915.

He died in 1977 and at that time Auntie’s granddaughter Cori Ann, who was an infant, came to live with her. Auntie raised her and Cori Ann provided her kōkua and companionship to her tūtū in the years that followed.

Cori Ann returned to Oʻahu to attend the Kamehameha Schools at Kapālama when she became a teenager. Auntie Caroline died in 2010.

In time Cori Ann met and married Dartanian Lorenzo. They moved to Hawaiʻi island to live and work several years ago.

We received the good news recently that Cori Ann and Dartanian welcomed the birth of their son Nathaniel Ke-koa-i-koho-ai-e-hoʻowaiwai-i-ke-ola Lorenzo. He was born at 3:56 a.m. on December 5, 2015. Kekoa arrived at 6 pounds, 11 ounces and measured 20 inches.

Nathaniel comes from Hebrew meaning “gift of God.” Kekoa comes from the Hawaiian meaning “the warrior chosen to enrich life.”

Nathaniel carries within him the bloodline of his mom and dad and their ancestors. Tonight is a night about the birth of another baby born in a land far from our island shores.

It is said that the birth of the Christ Child whom we remember and celebrate this evening was descended from 42 generations beginning with David. Jesus was born to Mary and his hānai father Joseph.

What strikes me about Jesus’ birth is not all of the commotion that ensued with the appearance of the angels to the shepherds, but what may have been on Mary’s and Joseph’s minds as they pondered their responsibility as parents to their newborn son. Our reading from The Gospel According to Luke tells us that they returned to Galilee to their town of Nazareth after taking the baby Jesus to the Temple in Jerusalem for purification and a blessing, done in accordance with the law of Moses (Luke 2:22-23).

In The Gospel According to Matthew, we are told that after Jesus was born, an angel appeared to Joseph in a dream and warned him: “Get up, take the child and his mother, and flee to Egypt, and remain there until I tell you; for Herod is about to search for the child and destroy him” (Matthew 2:13). After Herod’s death, it is said that they returned to Galilee and made their home in Nazareth.

Whether we look upon our own homes as places of comfort or challenge, what we hope for our children is to know, that they are safe. What makes this time of year special is that hope.

Jeff Rasmussen and Robi Kahakalau recorded the song “I’m Coming Home for Christmas” several years ago. The lyrics remind us what it means for us to come home:

“This time of year the nights become longer and the cold winter starts to blow and the feeling deep inside me is growing stronger, returning to the islands is all I know. I’m coming home for Christmas once again. It’s been too long away from those I love and all memories of Christmases before bring me home again!”

“When the Christmas lights go up in the city and the first snowflake falls to the ground, I keep warm with my thoughts of Hawaiʻi – to the islands I am homeward bound. The sea, the sun, the magic of alohas calling me and soon I’ll be home.” 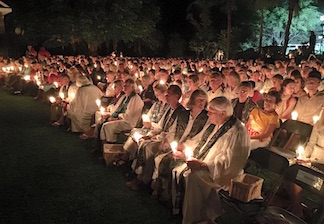 In a moment, you will hear the recording of Rasmussen and Kahakalau. You will also hear a recording by Jamie Lawrence who has been a good and dear friend of Keawalaʻi for many, many years.

Jamie recorded the song “Till the Season Comes Round Again.” It begins with an invitation: “Come gather around at the table in the spirit of family and friends and we’ll all join hands and remember this moment till the season comes round again. One night holy and bright, shining with love in our hearts, by a warm fire, we’ll lift our heads higher and be thankful we’re here ‘til this time next year.”

In 1951 Wihla Hutson wrote “Some Children See Him.” Tonight is about our children and about coming home to remember and celebrate once more the birth of the Christ Child.

Hutson lived in the shadow of World War II and at the height of the Korean War. No one knows for sure, but estimates are that between 50-70 million people died in World War II and another 10 million in the Korean War. It is said that for Hutson, the lyrics of this Christmas hymn sought to affirm that children of any race could imagine Jesus to be like them, with the underlying message that in the aftermath of such horrific wars we must “lay aside each earthly thing and with our heart as offering, come worship now the infant king. ʼTis love that’s born tonight.”

I invite you to turn your attention to the screen. You will see images of children who have become a part of our life as a church family. Some live here on island. Others live on other island and in other states. Some live in other countries.

Centuries ago, wise men traveled to Jerusalem looking for the baby Jesus. “We observed his star at its rising,” they said “and have come to pay homage to him” (Matthew 2:2). Perhaps it was on such a night as this that they saw the star rising.

On a night such as this our kūpuna, our ancestors would say: “‘O ka pā kōnane a ka mahina. Hoʻolaʻilaʻi ana i ka pō laʻi. The radiance of the moon bringing contentment to the peaceful night.”

Love is born tonight. We have come home once again. 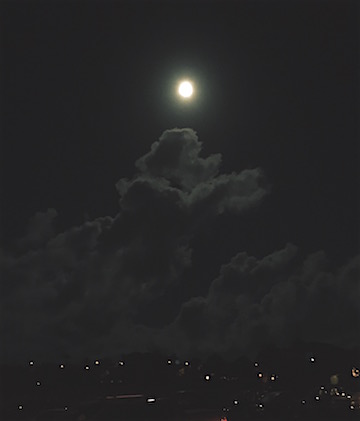 [ A note on the photographs on this page: the first one on top was taken by church secretary Lloyd Nebres from sometime last fall, with one of the last plumeria of the season on the floor of the pavilion. The following photo was taken by Deacon Tony Alleyne, at the service itself. The last photo was taken at around the same time as Tony took his photo at the end of the service here—but the risen moon was over Pa'ia, where Lloyd had played the piano for the Christmas Eve service at Keawala'i's sister church there, Pa'ia Hawaiian Protestant. ]