The four accounts of Jesus’ life that are in the Bible were written by Mark, John, Matthew and Luke. It is not surprising that each saw Jesus from their own point of view. “Mark brings us Jesus ready to walk into the Jordan [River to be baptized. The immediacy of who Jesus is and what he does is what preoccupies Mark]. 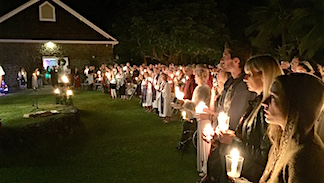 ... John draws him as particularly philosophical. [There is no Jesus ‘in the manger’ story for John. There are no angels heralding the birth of a child. John goes back to the beginning of creation, to the beginning of time to proclaim that Jesus is the light of the word. “The light shines in the darkness, and the darkness did not cover it.” (John 1:5)]. Matthew offers an infant Jesus, but the narrative points to men: a stepfather, a wicked king and his counselors, where wise ones from the East. Only Luke brings us into a stable, to the side of Jesus’ mother . . . into Mary’s heart” (Living the Word, Reflections on the Lectionary, Christian Century, November 22, 2017, page 21).

It is that time of year of year when we remember that Mary will give birth to a baby who will change the world. He will enter the world helpless and in need Mary’s tender care.

He will change the world.

But on a night such as this, we remember how he changed Mary’s life. For now, the world will have to wait.

Only hours ago she was known to others as Mary. Soon she will be known as the mother of a baby boy named Jesus.

We can only imagine how she must have felt. Perhaps she was anxious wondering what to say to her baby. Perhaps Joseph was nervous when Mary lifted Jesus up from her cradled arms and said, “Joseph, here, you hold the baby.” Perhaps when Jesus cried, they instinctively thought he must be hungry.

It is in the moment when the shepherds found Mary and Joseph, and the baby lying in a manger that we see their awe-struck tenderness.(Op. cit.). We may want to “relegate the baby [Jesus] to a barn, to wooden figures arranged just so, to a seasonal observance named after him” but much of the season is dominated by cookies and egg nog, Christmas trees and Christmas wreaths, shopping and shopping and more shopping for gifts to satisfy the desires of the ones we seek to please (Op. cit.)

In the hustle and bustle and the jingle and jangle of this season, we lose sight of Mary’s awestruck-tenderness – of a mother holding her newborn child and wondering what will become of him. In time, many will declare that he is the King of Kings (1 Timothy 6:15; Revelation 17:15, 19:11-16). Others will say that he is “the ruler of the kings of the earth” (Revelation 17:14).

The English poet Percy Bysshe Shelley was born in 1792 at Field Place, near Horsham, Sussex, England. He was one of the major Romantic poets of his day and has come to be regarded by some as among the finest lyric poets in the English language, and one of the most influential.

It was Shelley who wrote the sonnet, “Ozymandias.” In it, he makes the case that the power of the powerful is only temporary.

It was based on the life of Ramses II, the third pharaoh of the Nineteenth dynasty of Egypt whose reign from 1279-1300 BCE was the second longest in Egyptian history. In addition for his wars with his adversaries, he was known for his extensive building programs and for the many colossal statues of him found all over Egypt.

Ozymandias is the ancient Greek name for Ramses II based on an Egyptian phrase “User-maat-Re.” Shelley wrote:

I met a traveler from an antique land,
Who said – “Two vast and trunkless legs of stone
Stand in the desert . . . near them, on the sand,
Half sunk a shattered visage lies, whose frown,
And wrinkled lip, and sneer of cold command,
Tell that its sculptor well those passions read
Which yet survive, stamped on these lifeless things,
The hand that mocked them, and the heart that fed;
And on the pedestal, these words appear:
My name is Ozymandias, King of Kings;
Look on my works, ye mighty, and despair!
Nothing beside remains.
Round the decay of that colossal wreck, boundless and bare
The lone and level sand stretch far away.”

The message this Christmas Eve is not about the power of pharaohs or kings or presidents or prime ministers. The message is about the power of God’s love born in a child - not a love of sentiment or romance, of eros or human love, but a love born out of the heart of God. The message is about a love that is patient and kind; not jealous or boastful or arrogant or rude; not irritable or resentful; a love that does not rejoice in wrongdoing but always rejoices in the truth.

The message this night is about how love came down at Christmas.