"Let It Begin With Us" 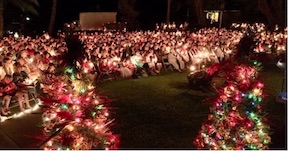 The war came to an end in July 1953 with a cease fire that led to a Korea that has been divided ever since. Five million soldiers and civilians lost their lives.

By 1960, the U.S. became embroiled in another war of another divided nation – North Viet Nam and South Viet Nam. Although a peace agreement was signed by the U.S. and North Viet Nam in 1973, the war continued until April 30, 1975. An estimated 2 million Vietnamese were killed, 3 million were wounded and another 12 million became refugees and 58,200 American men and women were killed or missing.

And after 9-11, the U.S. along with other coalition partners launched Operation Enduring Freedom in 2001 in Afghanistan and we have been at war every since. Over the last seventeen years, more than 2,400 Americans have died. More than 38,000 Afghan civilians and nearly 58,600 Afghan soldiers and police have been killed.

Is it any wonder that the words of the prophet Isaiah gives us cause to long for peace on a night such as this. Today there are wars and armed conflicts around the world. The desire for peace, especially among those who are being victimized, continues.

Lynda Hasseler, a Professor of Music and Director of Choral Activities in the Conservatory of Music at Capital University in Columbus, Ohio makes the following observation: “Humanity has been grappling with the concept of peace since the dawn of history. When we think of peace today, certain ideas tend to come to mind: a setting uncluttered by noise [as in peace and quiet], a region free of violence or perhaps a home where family members stop bickering. These images are striking in that they emphasize something that isn’t: conflict, war, tension, sounds, commotion.”

“But peace is more than a lack of something. It is also a greeting: Peace be with you; and a benediction: Go now in peace; and a gift: Peace I leave with you. What if peace is not an absence, but a presence?” she asks.

The Hebrew word shalom is often translated into English as peace. Some associate the word peace to mean an absence of war or conflict. But the word shalom has a very different meaning. The verb form shalam literally means “to make whole and complete.” The noun shalom then has the more literal meaning of being in a state of wholeness.

We know even when wars on the battlefield cease, the devastating impact of wars remain. Our longing, then, for peace, true peace is our longing for wholeness.

Over the years I have come to believe that such wholeness may be keenly felt in the wahi pana or special and celebrated places of Hawaiʻi and not doubt in many other places around the world.

I would venture to say that Keawalaʻi is one such a wahi pana. It is a storied place. Hymns and prayers, songs and chants of this wahi pana have been passed down through the generations. It is not surprising to know that Keawalaʻi means “peaceful bay.” Amid the turmoil of the world and amid the turmoil we experience in our own lives, this wahi pana becomes a place of refuge – a place where we are, in some mysterious and miraculous way, restored to wholeness.

Tony Alleyne is a deacon of our church. Aside from his duties as a deacon, he is always one to capture on his cell phone the various activities of our life as community of faith. I invited him to think about how he might visually convey a message of peace to us on a night such as this.

What Tony did was combine the song “Ke Au Maluhia” that was composed by Puakea Nogelmeier and recorded by Kealiʻi Reichel with the images of the people and place that is Keawalaʻi. The lyrics remind us of the words of peace from the prophet Isaiah – “They will not hurt or destroy; on all my holy mountains; for the earth is full of the knowledge of the Lord as the waters cover the sea” (Isaiah 6:11) and the angels who heralded the arrival of the birth of Christ Child with their proclamation, “Glory to God in the highest and on earth peace . . . ” (Luke 2:20).

Nogelmeier wrote in the opening verse: “He akāka ka hauʻoli i ka maka kamaliʻi. Ka makua, ke kupuna ohaoha mai nō. Joy is so apparent on the faces of the children. Grown-ups and elders are filled with gladness.”

And then the chorus: “He aloha kānaka i ke au maluhia. Hia ʻai ka manaʻo i ka nani a puni ke ao. He nani nō a puni neia ao. We share love and compassion in [this] season of peace. Thoughts are exhilarated by the beauty throughout the world. This world is beautiful indeed.”

On night such as this may the broken places in our lives and in our world be restored to wholeness. May the words of the angel be a source of comfort to us all: “Do not be afraid; for see – I am bringing you good news of great joy for all the people; to you is born this day in the city of David a Savior, who is the Messiah, the Lord” (Luke 2:10). His name is Jesus.