An angel appears and declares to shepherds in the field that a Savior, a Messiah, a Lord is about to born in the city of Bethlehem. Others have already been told including Mary and Joseph and later magi will come from countries far away.

In one sense the story is unlike any other and in another it is a story that is also familiar to us because we have our own stories to tell - not of angels or shepherds or magi but – of places and people and of families and faith that have shaped our own lives. In the telling of such stories, we proclaim to the world the goodness of God in our lives. 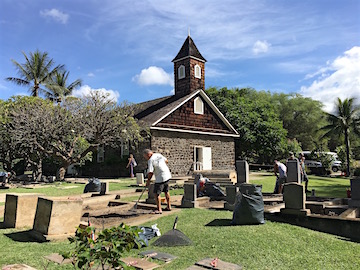 So I have a story to tell you. It was in the winter of 1995 that I came to realize how this place that we call Keawala‘i had come to mean so much to me. I was born in Kealakekua on the island of Hawai‘i so I am not of this place but as the years have gone by this place has become home for me and I know for many of you.

Even though we may live in Wailuku or Kīhei, Kula or Makawao, Kahului or Waikapū, Wailea or Kahakuloa, Lāhainā or Waiehu we have found a home - a refuge, a haven, a place of rest and renewal, a place of hope and healing, a place of promise and peace - here at Keawala‘i. Some families continue to live here in Mākena but they have grown fewer in number as the years have gone by.

We know of those whose families have been a part of this church for generations. Many will speak of days growing up in Mākena and of their memories of this church. I wondered what one would say of this place through a mele or song written by someone for whom this was home.

It was in the late winter of 1994 that I spoke with someone and asked, “Would you be willing to share your thoughts and feelings about the church and about Mākena that would become the lyrics to a song?” In order to move the process along, I decided to write a sample of what I thought and felt before asking the person that question.

If that person asked in return, “What do you mean?” I would provide them of what I thought would be a sample of what might be possible.

The response came back a week later. The person said, “What you wrote sounds good.” I protested and said, “No, no, no! The idea was to have someone for whom Mākena was their home to come up with their thoughts and feelings, not mine.”

My protest went unheeded and in the weeks that what began as an idea gave birth to a song that was made possible through the gifted work of many others. The English text was interpreted into Hawaiian by Keiki Kawai‘ae‘a, with the kōkua of Larry Kimura; the music was composed by Uncle Leslie Kuloloio. It was sung for the first time by the Lu‘uwai and Chang families of Mākena at our annual lū‘au on March 12, 1994 with Uncle Leslie on ‘ukulele and Uncle Eddie Chang on guitar.

It was recorded by Ron Kuala‘au later that year. Stan Lynch, a good friend of our church, produced a video for us of Ron in a recording studio. It was a video that we showed for the first time at our Christmas Eve Candlelight Service twenty-two years ago.

Some of who were in the video have since died. Others were infants or children who have become young adults. With all of the changes that have come over the years, the one thing that has remained constant is our love for Mākena and for all that Ke Akua, all that God has done for us. Now having said all of this some of you may be wondering what any of this has to do our reading from The Gospel According to Luke and the angels’ proclamation of peace on earth.

Many of you know that the name of the church – Keawala‘i – means “peaceful bay” when it is translated into English. Many who are from this area or who come to this area will be the first to say that for them this is a place of “tranquility, serenity, peace.”

The Christmas season is a time of peace. This time of year is also the season of the Makahiki for us here in Hawaiʻi, the time when the rains come. It was also the time in ancient Hawaiʻi when all wars ceased. So it was also a season of peace.

We know that even if all wars were to cease today that the time for healing may last a lifetime. We know that peace is not achieved merely with the cessation or absence of war, but when healing and wholeness is restored.

That peace comes not only to warring nations. Sometimes, there are wars within ourselves as we struggle to find peace in our own lives.

So the word this Christmas day is peace. It is a peace far beyond our own imagining. It is a lasting peace that comes from God’s love for the world that was born on Christmas day.

As the seasons change and the years go by, we will always return to the beauty of Mākena, to this pu‘uhonua, this sanctuary beside the sea. It is here that our spirits will find peace on the evening tide.