I could hear him from two blocks away. It was Christmas Day. I took my dog Kiko for a walk in the middle of the day.

As we turned down the street from where we live we could hear him shouting only in expletives. It sounded like he was having an uninterrupted one-way conversation with himself. But as we turned the corner we could see him, a young man, clutching the receiver of a pay phone to his ear outside the Old Wailuku Gym. 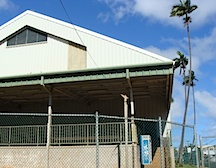 Kiko and I veered away and took a side path down to Wells Park. The volume of his voice diminished the further we walked on.

After about twenty minutes we made our way back home from the other side of the park. As we drew closer and closer to the gym we began to hear him again.

“I have a three-year-old kid and another one on the way. Yeah, they tell you about me but I not like that. You know me!” he yelled. “I not like that.” Between every other sentence was the one expletive he must have thought was an effective word for communicating his anger and distress.

It was Christmas Day. I resented the way his ranting and raving broke through the quiet of the day. It was a jarring occurrence perhaps not unlike what we discover this morning in our reading from The Gospel According to Matthew.

Matthew provides us with his stories about the child Jesus. In a way it would seem that Matthew is preoccupied with telling us about Herod-versus-Jesus stories. (Preaching Through the Christian Year, A, Craddock, Hayes, Holladay & Tucker, Trinity Press International, Harrisburg, Pennsylvania, 1992, page 51)

Yet we know we cannot stay. The world intrudes . . . a desperate king on a throne; a desperate young man on a pay phone.

But Matthew has more in mind than telling Herod-versus-Jesus stories or tracing the early itineraries of Joseph, the Child, and his mother Mary. (Op. cit.) Matthew is concerned about who Jesus is and for Matthew several affirmations are made.

First, Jesus of Nazareth is indeed Jesus of Bethlehem. Second, he fulfills the role and purpose of Israel in that, like Israel, he was called of God out of Egypt. Third, that his escape from the wrath of King Herod not only recalls the story of Moses, but helps us understand that Jesus, like Moses, is whom God has raised up.

Fourth, while Jesus appears to be a providentially favored child, Matthew states clearly that he is God’s son (verse 15). Through his account of the birth of Jesus, Matthew reminds us that Joseph is addressed by an angel in a dream and becomes an obedient servant taking Mary has his wife and receiving Jesus into his love and care.

Matthew also reminds us that the birth of Jesus is about “the child and his mother” and that it is a very human story in which there is no doubt that even in his infancy, Jesus was and is the Son of God.

Neither the distress and anger of a young man or a king can change the reality of what happened on Christmas day.

Because of the Christ Child, we are different in our worshipping, in our thinking, in our living of these days. We go on seeking to be gracious in our deeds, showing mercy to others as we have been shown mercy, according to the abundance of God’s steadfast love.

As Kiko and I continued on our way home on Christmas Day someone called from across the way, “Hūi!” I turned and noticed her sitting at one of the concrete picnic tables in another section of the park near the gym.

I noticed that she looked moe lepo, a bit disheveled. Her hair was unkempt and she looked like she had spent the night sleeping out on the street. On most occasions she is gracious in her appearance and demeanor – with her hair pinned up, a pareu drapped across her shoulder, speech that is deliberate and a walk that is stately. On other occasions when she is off her medication she is not unlike the young man lost in himself.

I let Kiko off her leash and she took off running.

“Kiko, come here,” I called out as I started walking quickly to catch up with her all the while knowing that I wanted to avoid a honi – giving Auntie a hug and a kiss. I had already concluded that Auntie probably had not been able to ‘au‘au or take a bath for a few days.

But it was Christmas Day.

After I managed to get Kiko back on her leash, we returned to the table where Auntie was sitting. I gave her a hug and a kiss and wished her a “Merry Christmas.” She smiled.

As we headed home, I looked down at Kiko. I wouldn’t say that she smiled but I did notice a change in her gait as if to say, after all, it is Christmas.