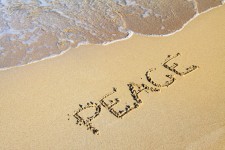 Ron Kovic was born on July 4, 1946 in Ladysmith, Wisconsin. He published his autobiography “Born on the Fourth of July,” in 1976.

A film based on the title of his book was directed by Oliver Stone and starring Tom Cruise as Kovic in 1989. As a child, Kovic grew up in Massapequa, Long Island, New York.

As a high school student, he did not excel in academics. He was, however, a respected athlete in wrestling and track. He considered a career in professional baseball but a speech by a local military recruiter inspired him to enlist in the Marines instead. It is said that Kovicʻs choice was reinforced by his own sense of duty, which had been instilled in him as a child in a Catholic household and in a family with a history of military service.

He joined the Marines in 1964 and was sent to Viet Nam. He accidentally shot a young corporal and was shocked when his superiors refused to hear his confession.

On another occasion, he and his fellow platoon members were ordered to kill a village full of civilians. They were told the villagers were armed. After the massacre, Kovic discovered that none of their casualties – which included women and children were armed.

On January 20, 1968, he was shot in the spine during combat and paralyzed from the waist down. He was awarded the purple heart. When he returned home to New York, he did not receive a hero’s welcome as was the case for other veterans who were returning from a war that had divided the country. In the years that followed he languished in veterans’ hospitals in the Queens and Bronx.

In one of the pivotal scenes in the film, Kovic’s guilt, shame and anger explodes in an encounter with his mother as she tries to comfort him. From his wheelchair he points to a crucifix on the wall as he tries to make sense of what happened to him in the war. “What about that? What about ʻThou shalt not kill?’” he shouts and then collapses in exhaustion. She is reduced to tears.

A report released by the Government Accounting Office several days ago noted that 20 veterans die by suicide every day across the U.S. (“Suicide Among Veterans Is Rising. But Millions for Outreach Went Unspent by V.A.,” David Philipps, The New York Times, December 18, 2018). Suicide prevention efforts by the Veterans Administration fell off sharply in 2017 and 2018.

Of the $6.2 million set aside for a media budget for public service announcements, only $57,000 was spent. Blame for the lack of response to the plight of veterans returning home was place bureaucratic confusion and vacancies in staff positions in key posts.

The suicide rate among veterans is about twice that of the general population and has been rising among younger veterans who continue to serve in Iraq and Afghanistan. For Kovic, the war was Viet Nam.

But for a young Hawaiian man who was born and raised here on Maui, the war was Iraq. I saw him as I left the office one day late in the afternoon at “pau hana time.”

He was near the mauka wall of the church that runs along the beach road. I noticed a young woman with him and realized it was someone I knew.

“Hui,” I said calling to her from across the church yard. “What you doing down here? Holoholo?” I asked.

“I came with my cousin,” she replied. “He’s visiting.” She introduced me him. I asked how he was doing. He explained he had come back to Maui for a break to somehow see if he could resolved his own struggle with PTSD – post-traumatic stress disorder. He was a veteran. After returning home, he found it difficult to adjust to life as a husband and father.

Eventually he found himself in the company of other veterans and it helped him to be with those who shared the same struggle. So he became involved in leading groups for other veterans. But his wife could not understand why he would spend so much time away from the family.

He looked the same. Nothing had changed – at least from outward appearances. She could not understand what was happening to him internally.

It seemed like the marriage was beginning to unravel.

We talked for a little while. I listened. Before he left, we prayed together. He was due to leave Maui the next day.

I thought about Kovic and this young Hawaiian man a few days after our Christmas Eve Candlelight Service. I shared on Christmas Eve that the Hebrew word shalom is often translated into English as peace. Some associate the word peace to mean an absence of war or conflict.

However the word shalom has a very different meaning. The verb form shalam literally means “to make whole and complete.” The noun shalom then has the more literal meaning of being in a state of wholeness.

But we know even when wars on the battlefield cease, the devastating impact of wars remain on those in uniform and on countless civilians. Our longing, then, for peace, true peace is our longing for wholeness.

Such a longing for wholeness implies that something is broken. Edward Tick, a clinical psychotherapist notes in his book War and the Soul that PTSD is best understood, not as a stress disorder, but as a disorder of one’s identity and a wounding of the soul (War and the Soul: Healing Our Nation’s Veteran from Post-traumatic Stress Disorder, Quest Books, Wheaton, Illinois, 2005), page 5).

Out of his encounter and interactions with veterans, he tells one story of a veteran of the American invasion of El Salvador who described his first kill. “He had a defending peasant in his rifle sights, but he did not want to pull the trigger on an impoverished farmer fearfully protecting his home. Meanwhile, his sergeant screamed in his ear, ‘Shoot, shoot, kill the bastard or I’ll have you court-martialed!’

He pulled the trigger. As he vomited and cried, his sarge slapped him on the back and said, ‘Don’t worry. The first one is always the hardest. It’ll never be so hard again’” (Op. cit., page 9).

What was troubling for the veteran was his feeling that he was forced to betray a moral code. “What about ʻThou shalt not kill?’”

One day Tick invited another veteran into his office. Over the course of their visit he remarked, “You’ve been scared out of your wits. You’ve been through just about the most horrible things a person can endure. You must have been frightened down to your very soul” (Op. cit., page 12).

He stared at Tick and said, “My soul . . . fled. Let me tell you what it’s like. You can feel the connection between your body and your soul when it starts to break. It’s like a thread that starts fraying. I tried so hard during those long nights, the earth shuddering, my hands over my ears. I concentrated to keep that thread from snapping. But I could feel it getting thinner and thinner” (Op. cit., page 13).

But how does one restore such brokenness – whether one is suffering from PTSD or whether one is the victim of domestic violence or a child troubled by emotional abuse or any number of other ways that we find ourselves broken by the weight of the world in which we live. How does one restore the brokenness we see all around us and in us - to wholeness?

Today, the First Sunday after Christmas, is associated with the childhood and family of Jesus. In our reading from The Gospel According to Luke, the boy Jesus goes to Jerusalem with his parents at the of the Passover feast.

It is said that he was twelve years old when they went up as usual for the Festival of the Passover. When the festival ended, his parents began to return home.

Jesus stayed behind but his parents did not know he had made that decision. It appears that they thought he was with relatives and friends. After three long days they found him in the temple sitting among the teachers, listening to them and asking questions.

When his parents found him they were astonished and anxious. Jesus’ response seemed almost defiant. “Duh?!? Didn’t you know that I must be here?”

Neither Mary nor Joseph understood what he was saying but it was Mary who continued to ponder in her heart what had happened. Jesus then went down with them and returned to their home in Nazareth.

He was obedient to them and it is said that he grew up “in wisdom and in years and in divine and human favor” (Luke 2:52). Over time many will come to recognize Jesus as the Messiah, the One who comes to save; the One whom we declare is the Prince of Peace.

The child grew and over time he came to know the broken lives of so many.

I have come to believe that it is through his brokenness on the cross that we are made whole. The prophet Jeremiah rightly observed “They have healed the brokenness of my people [but only] superficially, saying ‘Peace, peace, but there is no peace” (Jeremiah 6:14, New American Standard Version).

Ezekiel explained, “It is definitely because they have led my people astray, saying, ‘Peace,’ when there is no peace. And when anyone builds a wall, behold, they plaster it over with whitewash” (Ezekiel 13:10, New American Standard Version).

Jesus said, “Peace I leave with you; my peace I give to you. I do not give to you as the world gives. Do not let your hearts be troubled, and do not let them be afraid” (John 14:27).

The young Hawaiian man who stood by the mauka wall that late afternoon came home not simply for a break. It was his hope that by returning to the place of his ancestors, he would find the strength to restore his relationship with his wife and children. It was his longing for wholeness – for himself and for his family – that we prayed. We exchanged our aloha before I had to leave and for a moment, there was peace.