"Something God Alone Can See" 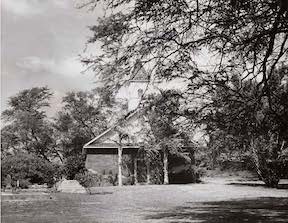 It’s been 5 months (almost to the day) since we have moved into this new way of “being the church.” Five months of dealing not only with the novel Corona virus, but also adjusting to the novel Keawala`i church in a time of pandemic. During those five months, I think, we have demonstrated amazing resilience.

We have learned how to “attend church” over the internet either by logging onto Facebook Live or through times of fellowship and meetings on Zoom. We have learned how to bless and receive communion in our own homes, to make financial contributions on-line, don masks, wash hands (for a minimum of 20 seconds), and keep at a safe, physical distance from one another. Although we don’t much like it, we’ve learned the fine art of “virtual hugging.” We’ve become accustomed to plexiglass barriers, Clorox wipes, and the occasional mishap in worship such as tumbling tripods, internet interruptions, and an interim pastor who is learning a whole lot more than how to pronounce Hawaiian words kind-of correctly.

Through all of this, I find myself often fixated on a recurring prayer of wondering – Why? What is going on here? Why now? What’s the point? Perhaps you have been asking yourself some of these same questions as this situation drags on.

During these 5 months I’ve spent an incredible amount of time on Zoom calls. Whether they are with clergy in the Tri-Isle Association, or the Hawaii Conference of the UCC, or various support groups, or with friends and family, or even individuals – especially younger clergy with whom I counsel, offer spiritual direction, or coach on various aspects of their ministries. What I’ve noticed recently is a shift – what began as “novel” and with a certain amount of exhilaration as we rose to meet the new challenge, has transitioned to exhaustion. I see it and hear it in the faces and voices of my clergy colleagues, and I have felt much the same in my own life.

The exhaustion is not so much from physical exertion – rather it is a result of mental and emotional stress as we live through an experience that has no specific end in sight.

One of my colleagues, Kahu Wayne Higa of Ka`ahumanu Congregational Church in Wailuku said recently, “We thought it was only going to be 2 weeks, and then maybe a month, but it’ll be gone by Easter.” That turned to, “Surely by the fall.” And now it’s “Definitely when we get a vaccine. Right?” All along we have been hoping and subsequently resisting rather than accepting reality and that has resulted in some bad behavior causing an increased spread of the virus.

Another colleague, the Rev. Tino Cordova of the Iao Congregational Church said, “I’ve been resisting this all along and I’ve learned that I need to ride it like a wave.” He joked about being from New Mexico. Having not grown up around water, he had no idea what to do the first time he saw a wave coming toward him in the ocean. He learned quickly that you have “to yield – to surrender” by ducking under or moving with the wave – and that has made all the difference.

I thought a lot about those comments this week, as I began to recognize how they really offer some interesting life lessons. Lessons we see being lived out in the story that was read earlier from the Hebrew scriptures – in the life of Joseph. AND, I’m seeing some interesting parallels in my own life today. [Pause]

A lot of years have passed since the last vignette we considered in the scriptures. You may remember, when we left Joseph last week, his brothers were so jealous of him they threw him in a cistern willing to leave him to die of starvation – but Reuben convinced them otherwise. They, instead, sold him into captivity – and were convinced they had gotten rid of him for good. Through a series of events (I invite you to read the whole story in Genesis 37-45) and especially due to his ability to interpret dreams, doors opened for Joseph to positions of leadership under the rule of Pharaoh in Egypt. This gift of interpreting dreams got him released from prison. Listening to his dreams, Pharaoh was convinced to store enough grain and resources to get them through Joseph’s predictions of an upcoming 7-year famine.

Within the first two years of the famine, Joseph’s brothers came seeking aid in Egypt. Without ever realizing it, they came begging to their own brother whom they did not recognize as they thought had long since died.

Imagine the looks on their faces when Joseph revealed himself to them. Imagine the feelings they experienced when this whole drama came full-circle and they had to face what they had done. [Pause]

Now, if you ask me, I think, Joseph had every right to retaliate. In fact, it’s exactly what I would have EXPECTED him to do. He could have held onto the grudge of how he was so severely mistreated by his brothers and respond by throwing THEM into prison. But, Joseph went in a completely unexpected direction. He forgave them – and offered to them the resources they would need to survive the famine – food, shelter, and protection. Reconciliation and Reunion – not Retaliation was of utmost importance to him.

But, I don’t believe he did this of his own volition.

Joseph offered his brothers a gift that took him years to understand – as God softened his heart. He said to them, “Don’t feel badly. Do not blame yourselves for what occurred. God was behind it.”

While it may be difficult for ME to accept, Joseph had come to a deeper understanding that God was behind everything that happened in his life – and stood with him in the good times and the bad – and, BECAUSE of his life-experience, God was able to bring him to this place (Egypt) where he was able to save countless lives. It was all something previously “God alone could see.” But now HE understood. [Pause]

I don’t know what you may be thinking, but I struggle with that idea. In fact, I almost cringe when I read those words, “God was behind it.” It’s a similar feeling I get when I see someone going through some horrendous experience in life, and then hear that person (or others say), “It must be God’s will.” Really? Really?

It’s funny, last week’s sermon seemed to kick up a lot of dust. I received more comments on it than any other I’ve preached at Keawala`i, which I appreciated very much. It lets me know you are listening, thinking, and responding to what God is revealing to you. But this one for me is MUCH more challenging.

Forgiveness IS the right thing to do. Jesus speaks of it repeatedly asking us to forgive 70 x 7 and to love and forgive our enemies. But my human nature wants to do otherwise. I want to retaliate when I’ve been wronged. I resist offering grace or trying to see the hand of God in situations where I feel like the victim. I want revenge. I want to get what, I believe, “I deserve.” I find myself wanting to “fight the wave rather than ride it” even though I know doing so will exhaust me. I for one cannot always see God behind it.

I want to be very careful as I offer my mana’o on this topic. It is so easy to get out on thin ice when one suggests forgiveness as a constant in life – or to demand it as “the Christian thing to do.” I’m not even sure forgiveness is possible in every situation. There are cases of abuse and violence where the mere suggestion may elicit even deeper emotional and psychological wound. But more often than not, to hold onto the grudge and refuse to engage in the possibility of forgiveness is like resisting a wave of grace that is readily available to us. I believe Joseph understood that and in his tearful reunion with his brothers felt the healing power of reconciliation. Again, this is not of our own volition. It is often something “God alone can see” and “God alone can do.” – through us.

I think my problem, and perhaps you can identify, is that I want answers – understanding – the broader perspective – RIGHT NOW! I often lack the patience to “wait and see” what God alone can see. I want to get to the resolve, the happily ever after part, the “ta-dah” as a friend of mine put it. But, that is rarely possible. Such is certainly the case in this current pandemic – and maybe so for other situations of your life. I could certainly name a few.

Did Joseph understand the reason why his brothers did what they did as he was being carried away by foreigners? I doubt it. Did Queen Lilioukalani understand why so many – in the church – turned their backs on her has she was placed under house arrest? I doubt it. But, in time they did – and they could let go of any grudge that became an obstacle or resistance. They let go and forgave thereby riding their own personal wave of grace.

The concept of forgiveness is a difficult and challenging one for most of us to understand fully let alone – to do. Here’s where I think God needs to intervene. Maybe we can begin by remembering we worship a God who has forgiven us – who loves and embraces us – who knows our heart and our every thought – and wants nothing less than the very best for us. That’s something God alone can see – and God alone can do.