"How My Mind Has Changed" 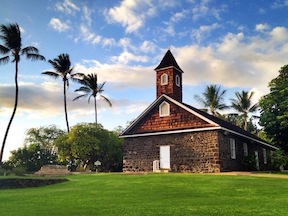 Following the tenth and final plague, when the angel of death devastated all the Egyptian households by destroying their firstborn, while passing over the homes of the Israelites, Pharaoh finally admitted defeat. “Leave,” he cried. “Take all the Israelites and get out of Egypt! Leave, now!” And, with that, they were off. Taking only the provisions they could carry, they completely depended on the Lord to provide.

While Moses called the Israelites into action, it was God who led the way – in a pillar of fire by night illuminating their path, and a pillar of smoke by day, God assured them that they would have everything they needed as they made their way through the wilderness and into the Promised Land.

But, it didn’t take long for Pharaoh to change his mind. He soon rethought his decision to free the Israelites from servitude and sent his entire army – chariots and horsemen and armed soldiers – in hot pursuit. They chased after Moses and the Israelites and had them trapped between all the military strength Egypt could muster and the Red Sea. The Israelites were paralyzed physically and emotionally as fear stood in the way of their faith in the God who led them to this moment. Their situation appeared hopeless.

It was then that the most remarkable thing happened. The pillar of smoke that previously went before them – guiding their way – moved behind them separating them from the Egyptian army. It stood between them throughout the night while Moses raised his staff and commanded the sea to divide – a vision most of us can only imagine from the Cecil B. DeMille depiction of the story in his award-winning film, The Ten Commandments.

You remember, Charlton Heston facing the Red Sea – staff raised – wind blowing violently – water dividing into giant walls – and, eventually, the Israelites crossing over into safety. But the Egyptians, well, let’s just say you don’t want to be on the wrong side of God. At least that’s the story we love to tell. And, certainly one the Israelites relished as they rejoiced in God’s favor by singing a raucous song of victory with clapping, and dancing, and tambourines.

I still remember singing a contemporary version of that song as a kid, “I will sing unto the Lord…

But, it’s harder for me to sing that song now. The words kind of get trapped in my throat. The whole notion of war and violence, winners and losers seems antithetical to the God I know in Jesus – the one who challenges me to “love my enemies.”

So, what can we make of this story the Israelites loved to tell – a story retold each year during Passover – and one that’s a part of our story as well? [Pause]

In a professional magazine I love to read, The Christian Century, they have been running a series in which well-known religious writers reflect on the statement, “How my mind has changed.” I really enjoy reading those articles because they remind me that, just like everything else in life, our theological understandings about God, the Bible, and acts of faith like prayer change over the course of our lives. I’m not the same person I was 20 years ago – 40 years ago. I’m not even the same person as I was 6 months ago. My thoughts, ideas, and understanding about God and the world in which I live have changed rather dramatically. As a result, MY story – as a person of faith – has changed.

That old song I learned in Vacation Bible School as a kid was great while I was in the practice of playing “Cops and Robbers” or “Cowboys and Indians” but as I have matured, the idea of winners and losers has lost its appeal. There has got to be a better way than fighting – and I know NOW that winning does not always entail victory. How do we make sense of these very different aspects of God? How has your understanding – your mind … changed? [Pause]

It has often been said that the God of the Old Testament is a God of war who did whatever was necessary to demonstrate strength so that all would come to understand that “our God was better than all the other gods.” Conversely, the God of the New Testament is often proclaimed as a God of love. A self-sacrificing God who loved us so deeply he was willing to give us Jesus. While there is some evidence of that differentiation, I think that understanding may be a bit TOO simplistic.

God does appear to be in many more battles in the stories we read in the Hebrew Scriptures, but does that mean that the Hebrew God was militant and violent, and the Christian God, peaceful and loving? That doesn’t make sense. I wonder if the biblical writers began to understand God differently over the scope of the entire canon. The stories told as the Hebrew faith was differentiating itself were militant in order to demonstrate God’s strength while the stories of Jesus depict God’s desire to reach out to the marginalized, the “least, and the lost.” In other words, it just may be the different circumstances called for a different perspective?

Or are we evolving as a human species – perhaps beginning to understand what God intended all along was peace – that violence ultimately will not serve us or save us, and that injustice anywhere is indeed a threat to justice everywhere. [Pause]

I think the Israelites learned so much more through this victory than mere winning. In fact, I think their entire understanding of God changed as they learned a whole lot more about their faith.

Their focus, as they began their pilgrimage to the Promised Land, was solely on what lay ahead, and what they would get for their obedience. Their “eyes were on the prize” as they felt it was God who had come to deliver them. This was the Almighty God of the pillar of fire and smoke – who granted them freedom – and provided food for the journey, but, who had seemingly abandoned them in this moment of desperation. They were trapped and were completely dependent on God who had to make a way out of no way in order for them to survive. And that is precisely what happened.

I wonder if you know this experience in your life. When have you felt trapped or abandoned? When has your experience of God been disappointing and your faith has taken a beating? Did you become angry or was your understanding of God changed as you began to see God from a whole different perspective – maybe not as a leading light, but as a protective veil that separated you from ultimate danger? [Pause]

This week marked the anniversary of the death of my former partner. Even though Brennen died 16 years ago, I still remember that moment like it was yesterday. Many of you know exactly what I am talking about. When Bren died, I was in shock. It was sudden, tragic, and none of us saw it coming. My faith took a beating that day – even to the point of wondering whether I wanted to go on with my life. And, it took me a long time before I saw God’s better angels ministering to me in the most loving ways – through the nurse who sat with me – the doctor who hugged me – and who, I believe really understood. The church folks who came and brought me home from the hospital. The amazing community at Mission Hills United Church of Christ who became family in ways I could have never imagined.

I didn’t know if I would ever preach again, but, in time, I began to see God differently. My perspective – my mind was changed as I realized God’s palpable presence in the pain, the bewilderment, and in the uncertainty of my future. Eventually, the way was made clear – a light shined in the darkness – and I was given what I needed to understand faith in a new way – not as someone who has won, but as one who was victorious.

While it may be helpful to read stories like this as part of biblical history, I think it is much more enriching to ponder what they evoke at a much deeper level and how they affect my understanding of God – my perspective which helps to determine the strength of my faith. When has God, for you, moved from a guiding light that goes before you, to a comforting veil that has your back? Think about that.

How has your mind changed – over the years? How do you understand God NOW as a result of your life experience? That’s the story that is yours to tell and one that needs to be heard.