I saw Kainoa at the Wells Park earlier in the week. He was there for another practice and workout with members of his baseball team. 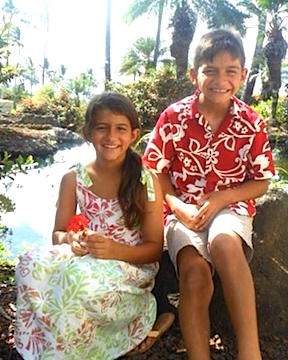 His dad, Gary, is one of the coaches. Gary was off to the side in a batting tent with one of girls who was on the team.

My dog Kiko and I were out for our regular late afternoon walk. By the time we had found our way to the park the sun had already disappeared over Mauna Kahalawai and dusk was not far behind. Leilani, Kainoa’s sister, was also at the park.

She ran up to say hello to Kiko. We visited for a bit and then Kiko and I continued on our way eventually returning home as darkness fell. I thought about Kainoa, Leilani and Gary aware that they faced the long drive back to Kahakuloa where they live. I am not sure what a day in their lives might entail but it is very likely that along with their mom, Karen, they have more than enough to do with school, home, work and church.

For many young parents, there is always getting to and from school, homework to be done, visits to the doctor and dentist, hula classes, practices of one kind or another – band and drama, canoe paddling and soccer. There are meals to prepare and consume, house chores to get done, yard work, feeding the dog or the cat or both, and church to attend. Time for sleep and rest become precious moments in a long and busy day.

It is easy for all of us “to fall into patterns of busyness, filling days and nights with relentless activity and perhaps many [of us] are already tired so early in the year” (Seasons of the Spirit, SeasonsFUSION Advent, Christmas, Epiphany 2014-2105, Wood Lake Publishing Inc., 2014, page 175). There is so much that demands our time and attention. Whether we are young parents with children or parents with sons and daughters in college; whether we are single or married; whether we are retired or just beginning a career in the workplace, time for sleep and rest become precious moments to us.

Our reading from The Gospel According to Mark reminds us that even someone like Jesus often found himself falling prey to those who demanded his time and attention. Mark writes his account of Jesus’ life with “a sense of immediacy” (op. cit., page 174). In fact, it is said that his use of the Greek word eutheos translated as “straight away” or “immediately” appears at least 40 times in his gospel.

In just the ten verses of our reading this morning “Jesus visits in a home, heals a woman, is served by that woman, faces the ‘whole city,’ cures the ill, casts out demons, sleeps, gets up early, goes to the wilderness to pray, is found by his disciples, chooses to go forward to other places rather than return to where he was being awaited, and continues proclaiming the gospel and casting out demons.” (Ibid.) Jesus moves quickly and so it should not surprise us that he also gets up in the early morning while it is still dark to go to a deserted place away from the disciples to pray (Mark 1:35).

We can only begin to imagine how exhausted he may have been. As if to underscore the demand on his time and energy, the Bible tells us that Simon and the other disciples “hunted for him” (Mark 1:36). They literally “chased him down” (Preaching Through the Christian Year B, Craddock, Hayes, Holladay & Tucker, Trinity Press International, Harrisburg, Pennsylvania, 1993, page 98)

When they found him they interrupted him with what they thought was good news – “we have a big crowd waiting” (Ibid.). They appear to chide for him for his absence, “Everyone is searching for you. What are doing out here? We need to go back.”

Jesus responds, “No, we are not going back. We are going to the neighboring towns. I came to proclaim the good news of God (Mark 1:14).

Jesus is not enamored by the crowds. It is something Simon, Andrew, James and John do not understand. In every instance when Jesus finds himself publicly surrounded by crowds, he withdraws privately to be with someone or to be alone.

It has been said that we are called as Jesus was called to be active in the proclamation of the good news. But we are also called to rest, to enter the stillness in which we can hear God’s voice and be restored by God’s peace (Seasons of the Spirit, page 175). It is an invitation to which a young Hawaiian boy named ʻŌpūkahaʻia responded.

In 1809, ʻŌpūkahaʻia saw a ship called the Triumph sail into Kealakekua Bay on the island of Hawaiʻi. Five years earlier, when he was twelve years old he saw his parents killed when a war broke out among the chiefs in Kona.

He and his younger brother, who was three years old at the time, survived. Hoping to save his brother, he fled carrying him on his back. But others followed in pursuit. A spear was thrown and his brother was killed.

It may be that in his despair, ʻŌpūkahaʻia made the decision to leave Hawaiʻi in search of a new life and so he dove into the waters of the bay, boarded the ship and became a seaman at the age of 17. His journey would take him to China and the West Indies and eventually to the port of New Haven, Connecticut the following year.

Over the next decade he attended Andover Theological Seminary and while there he became a convert to Christianity. His desire was always to return home to Hawaiʻi to share the good news of his newfound faith.

However, before he could return to Hawaiʻi, ʻŌpūkahaʻia fell ill with typhoid fever. He died on February 17, 1818 at the age of 26. His dream of returning home would be fulfilled by others who would make the long and arduous journey from New England in the years that followed.

ʻŌpūkahaʻia noted, in writing, just before his decision to become a Christian, the words recorded in 1 Kings 9:12. “The Lord was not in the wind, neither in the earthquake, nor in the fire, but in the still small voice.”

Next Sunday we will remember and give thanks for the life and witness of ʻŌpūkahaʻia that gave birth to this church and many, many, many other churches throughout our islands. Like Jesus, like ʻŌpūkahaʻia we will discover the presence of God in the quiet and silent moments of our lives – away from the noise and the busyness of the world – and remarkably sometimes even amid the noise and busyness.

The siren of an emergency medical vehicle blared as it sped along Waiale Road in Wailuku toward the Maui Memorial Medical Center. It was late in the week. Kiko and I were out for our daily walk once again. The sun had already fallen below the ridge lines of Mauna Kahalawai.

The noise and busyness of the world was all around us. Cars hurried along on their way home stopping at the gas station, the drug store, and the supermarket. I found myself walking across an open field with Kiko near Foodland at Kehalani.

Kiko kept herself occupied chewing on blades of grass and sniffing the ground as she scurried back and forth, forward and back. At one point we paused.

I looked over the rooftop of homes and off toward the horizon beyond Kahului harbor. Thick clouds filled the sky. Kiko lifted her snout skyward as if to say rain seemed to be on the way.

Kiko and I were far from being in a deserted area and yet I could feel the evening stillness as the light of day gave way to early evening. It was good to be alone, albeit, with Kiko and to be reminded if we are to gather the outcasts, to heal the brokenhearted and bind up their wounds, and to lift up the downtrodden, we will find sustenance and strength as did ʻŌpūkahaʻia in the still small voice of God.